MACON, Georgia (41NBC/WMGT) — A Macon man was arrested and charged with possession of drugs while traveling without headlights.

Bibb County Sheriff’s deputies patrolled the Pio Nono Avenue and Harris Street area when they saw a Honda Accord traveling without headlights.

Deputies say they stopped the car and approached the driver, 44-year-old Terence Marlon Chavers, of Macon. While talking to Chavers, deputies discovered that he had a warrant for Probation Violation.

Authorities say that deputies checked Chavers and found a bag of Marijuana in the driver’s seat. Deputies also found a bottle of Hydrocodone pills along with approximately 9.5 grams of Ecstasy.

Authorities took Chavers to the Bibb County Jail and charged him with the following: 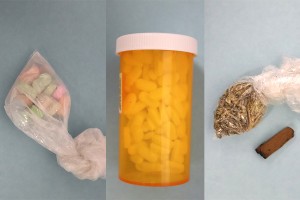 If you have any information about this incident, call the Bibb County Sheriff’s Office at 478-751 -7500. You can also call the Macon Regional Crimestoppers at 1-877-68CRIME.