The Colquitt County School Board voted unanimously Monday to approve Rogers for the position. 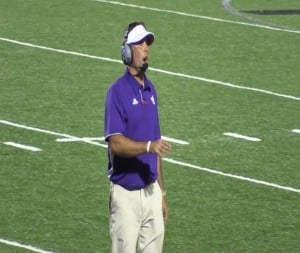 “Will meet with our team here in the morning,” he said via text message Monday night. “Then start there in the afternoon.”

Former lineman Conor McElwee responded to Rogers’ tweet, thanking him for helping mold him into the man he is today. “I can’t thank you enough,” McElwee wrote. “Thank you for the 4 years I had with you. Go hounds”

Quarterback Hunter Costlow, who enters his senior season this fall, called his time with Rogers “one heck of a ride.”

Tomorrow starts your new journey coach! Its been one heck of a ride @CCPackersFball you’re getting a good one! pic.twitter.com/vQu4LpWAlb

Rogers responded, “Love you and gonna miss all of you with all of my heart.”

Rogers, who as offensive coordinator helped lead Griffin to the GHSA AAAA title in 2014, was called a “rising star” by Jones County Schools Superintendent William Matthews after his hiring in 2014. “He’s very dynamic,” Matthews told 41NBC. “Very personable, very driven. I really think he’s going to be a great asset.”

Rogers replaces Rush Propst, who was 119-35 in 11 seasons as the Packers’ coach and led the team to two state titles and five state title game appearances.

Propst, who gained national attention in the early 2000s as Hoover’s (AL) coach on MTV’s show Two-A-Days, was fired last month and called allegations against him “extremely unfair” in a prepared statement five days after his firing.

Rogers will lead his new team for the first time in a spring game May 18 at Troy University’s Veterans Memorial Stadium, according to a tweet last month from Meridian (MS) High School’s football profile.

The Cats will travel to @TroyTrojansFB University and play @CCPackersFball on May 18th at 7pm. pic.twitter.com/OkQmVDEvOP

A rising Jones County senior told 41NBC’s Tucker Sargent Saturday he had heard from “other coaches” Rogers was planning to leave and that it would be official Monday, but the player was optimistic about the future.

“We have a really strong group of seniors coming back,” he said. “Not just talent wise, but leadership is unreal.”