Highs in the 90s returning ahead of the weekend

MACON, Georgia (41NBC/WMGT) – More heat and humidity will be coming to the Peach State ahead of Independence Day. 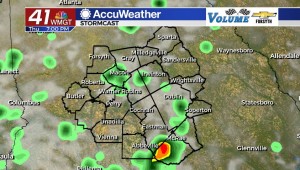 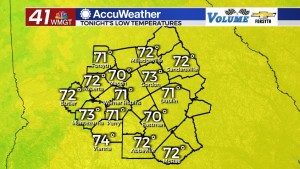 Mostly cloudy skies will continue to hang around the Middle Georgia region during the evening hours. More clouds will fill in as storms develop through the evening hours. Storms will for the most part be small, however they will bring some heavy rain as well as cloudy to ground lightning. Some larger storms could bring some small hail as well. There is no risk for severe weather this evening, however. A couple of small storms could persist into the early parts of the overnight hours, however most of the rain will be finished by midnight. Lows will drop into the lower 70s around Middle Georgia heading into Friday morning. Locations that see very little wind and/or late overnight rain could wake up to some patchy fog. 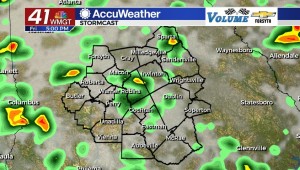 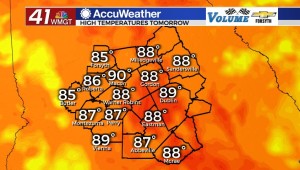 Cloudy conditions will begin the morning in Middle Georgia, however a few pockets of sunshine may come out during the late morning and lunchtime hours. Temperatures will climb into the upper 80s and lower 90s. Scattered storms (likely more numerous than this afternoon/evening) will begin to fire up during the later lunchtime hours, scattering more as the evening progresses. Storms will bring heavy rain and frequent cloud-to-ground lightning and could also bring some small hail and strong wind gusts. Storms that set up shop over one location for an extended period of time could also bring a minor flash flooding threat. Much like tonight, however, there is no risk for severe weather tomorrow either. 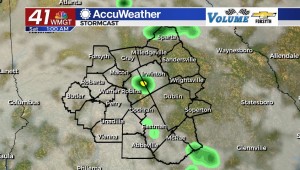 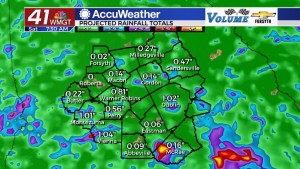 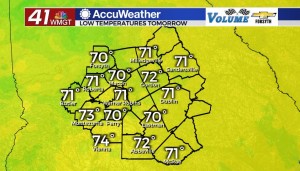 Storms will begin to subside once the sun sets tomorrow night, however a few will likely persist until at least midnight. Once midnight passes skies will begin to clear a bit heading into Saturday morning. A few light showers may still hang around. By the time Saturday morning arrives skies will be partly cloudy, allowing for some pretty sunrises around the region. Lows will primarily be in the lower 70s however a couple of spots may drop into the upper 60s. A couple of spots may also wake up to a bit of patchy fog. 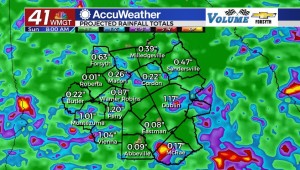 The heat is wasting no time coming back as highs will likely universally be in the low to mid 90s Saturday afternoon. Only locations such as Forsyth may stay below 90°, however with the heat indices it will feel in the mid to upper 90s around much of the region. There will likely be a lot more sun than what we have seen this past week over the weekend, allowing heat indices to rise even more. More isolated storms will fire up in the afternoon and evening hours. Storms will subside overnight, leaving mostly cloudy conditions into Sunday morning with lows in the lower 70s.

Sunday will be the same as Saturday but slightly warmer.

Independence Day on Monday will be similar to both days from the weekend, however there will likely be a bit less clouds and highs will be slightly warmer. Storm chances in the afternoon and evening look to be isolated at this time. Lows will begin climbing towards the mid 70s. 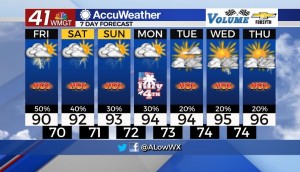