MILLEDGEVILLE, Georgia (41NBC/WMGT)— When you see daffodils, you probably don’t think of The Holocaust. The Daffodil Project wants to change that.

The project made it’s way to Georgia College in Milledgeville.

The daffodils are a symbol of the yellow star Jewish people were forced to wear during The Holocaust. The flowers also honor those who survived it.

The President of the Hillel chapter, Abbie Frankel, says the legacy of the daffodils will last long after she graduates.

“It brings forth this awareness to people who maybe don’t know all about the Holocaust or maybe aren’t sure why we have the daffodils.” said Frankel, “It will serve as an education tool on our campus as well.”

The goal of the project is to plant 1.5 million daffodils around the world. They’ve already planted more than 600,000 to date. 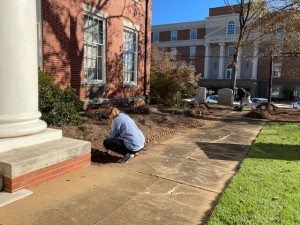 “We understand that there’s a whole generation of young people who have never heard of The Holocaust or really don’t understand what it represents” said Weintraub.

The saying “Never Forget” is used a lot in reference to The Holocaust, but saying and doing are two different things.

“We have to make sure that we’re not just being bystanders,” said Frankel, “we have to step forward and prevent what happened before and really use our voices.”

The daffodils planted Tuesday will bloom in the spring.