MACON, Georgia (41NBC-WMGT) – A Macon man faces several drug-related charges after authorities found marijuana and other substances in his home.

Bibb County Sheriff Deputies responded to a call about a fight between two men at Dannenberg Lofts on Third Street. A maintenance worker told deputies that a man kicked in the door of one of the lofts. When deputies checked the affected loft for the suspect, one of them smelled marijuana. That’s when the deputy saw two large, clear bags of marijuana inside the loft. The tenant, 33-year-old James Elliott, then tried to cover the drugs with a bag. The deputy called the Sheriff’s Office Drug Unit and got a warrant to search the rest of the loft.

During the search, deputies found more than 70 large bags of suspected marijuana. They also found several boxes of vape pens, and mason jars containing an unknown, dark brown liquid. Authorities took the items for testing to confirm their contents. 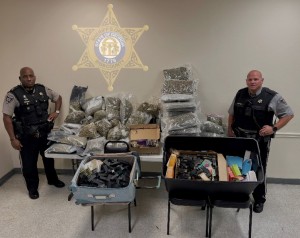 Elliott is in custody at the Bibb County Law Enforcement Center without bond.

Anyone with information about this incident is urged to call the Bibb County Sheriff’s Office at 478-751-7500 or call the Macon Regional Crimestoppers at 1-877-68CRIME.