MACON, Georgia (41NBC/WMGT) – Eastbound lanes of Hartley Bridge Road over I-75, along with the on-ramp from the eastbound lanes to I-75 North, are temporarily closed after an accident Friday afternoon.

The Bibb County Sheriff’s Office says it happened on the ramp to I-75 North from the eastbound lanes of Hartley Bridge Road just after 3 o’clock. 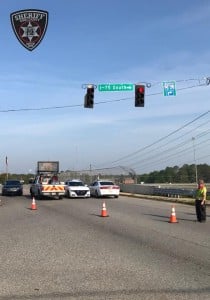 Deputies say a tractor trailer, driven by 54-year-old Anthony Johnson of Danville, was hauling a large piece of equipment. Part of the equipment hit the bridge as the truck traveled under Hartley Bridge Road.

A Nissan Altima behind the tractor trailer, driven by a 55-year-old woman from Hampton, was damaged by debris falling from the bridge. She was taken to Coliseum Medical Center and is listed in stable condition.

GDOT decided to close the lanes until it can determine if the bridge is safe for traffic.

The sheriff’s office says all eastbound traffic is being detoured to I-75 South to use Sardis Church Road as an alternate route to cross over I-75.