MACON, Georgia. (41NBC/WMGT) – In May of 2015, the Tubman Museum moved from a small building to a massive 49,000 square foot facility in the heart of Downtown Macon. Having a new space that is nearly six times the size of the original museum allows the museum curators the ability to bring out artifacts that were in storage due to limited display areas. 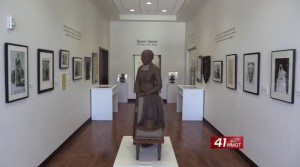 Many would think that since the Museum was named after Harriet Tubman that majority of the artifacts would be dedicated to her, but that is not the case. While Tubman is the focal point of the second floor, this level also houses the sculpture gallery, the fifty foot mural of African American history, as well as several other sculptures and paintings scattered throughout the other galleries.

The museum doors are closed on Monday, but open every other day of the week from 9 am until 5. The cost of admission is ten dollars per adult and six dollars per child. Special group rates and discounted tickets are available as well.