One teenager arrested, one wanted after west Macon robbery

MACON, Georgia (41NBC/WMGT) – One teenager is in custody and another is on the run after Bibb County deputies say they robbed a Macon dollar store Tuesday night. 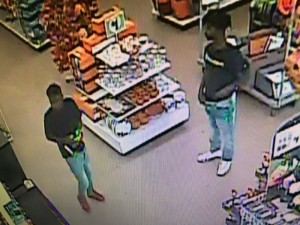 Deputies were told the teens entered Dollar Tree at 1517 Eisenhower Parkway just before 8:30 p.m. A clerk recognized them as having shoplifted in the past and approached them to make them leave.

That’s when one of the teens pulled out a gun.

They took bags of chips, candy and drinks before running away.

A store employee who was walking to work passed the teens behind the store. The teen with the gun pointed it at the employee before running away.

18-year-old Dailan Makkari Alston of Macon was arrested around 11:30 Wednesday morning. He is charged with aggravated assault and armed robbery and is being held without bond.

Deputies need help identifying the second teenager, who is on the right in the attached image.