MACON, Georgia (41NBC/WMGT) – Cloudy skies have returned to Middle Georgia overnight and will stick around the rest of the week. 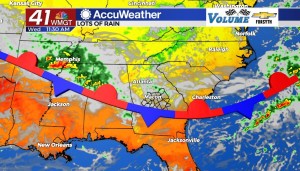 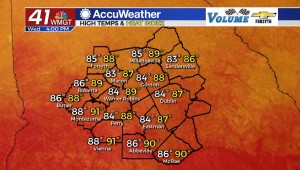 Cloudy skies moved into Middle Georgia during the overnight hours and will dominate the region today. We may see a few pockets of sunshine later this afternoon, however overall things will be cooler due to the arrival of thicker clouds. Highs today will be in the low to mid 80s around Middle Georgia with heat indices in the upper 80s. Ambient winds will generally come in from the north at about 5 mph. 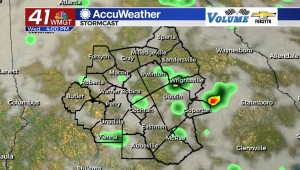 Storm chances today will rise as we go along, however during the daylight hours we should only see a few isolated showers. A couple of them could become thunderstorms as we push later towards the evening. There is a high probability for storms that form in the evening to persist into tonight. It is also suggested you do not leave your rain gear in the car if you use it today. 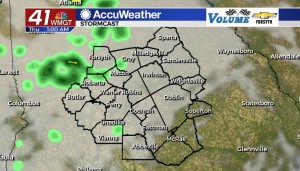 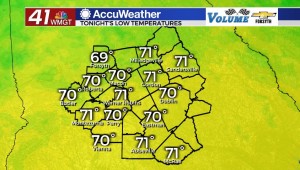 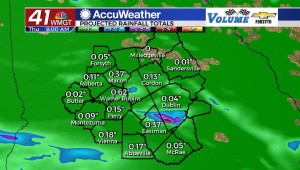 Overnight tonight is when our rain chances will jump up, especially after midnight. Overcast skies will hang over the region until then with a few storms carrying over from the evening hours. The heavier, more organized rain will begin to take over as we push into the early morning hours of our Thursday, becoming more widespread as we approach sunrise. Lows tonight will be in the upper 60s and lower 70s, and conditions out the door tomorrow are likely to be soppy (and potentially foggy) across most of Middle Georgia. 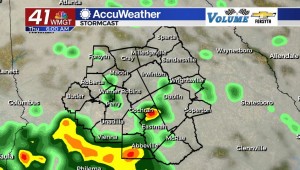 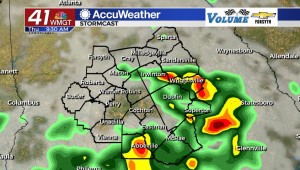 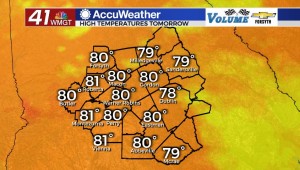 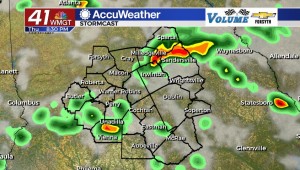 It will be a wet start to our Thursday as widespread rain begins during the early morning hours. The heavy, consistent rain will hang around for the first half of the day, making its way out of our eastern counties as we roll through the afternoon. A few isolated thunderstorms may fire up during the afternoon and evening hours as well, following up the early mess. All of the clouds and rain will keep temperatures cool – the coolest they have been in months. Forecast highs tomorrow afternoon are in the upper 70s and lower 80s. 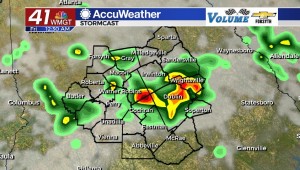 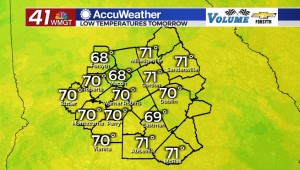 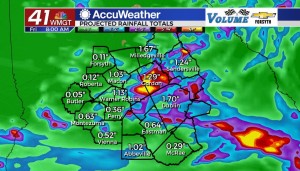 Tomorrow night will see more organized rainfall move in, starting with thunderstorms persisting from the evening. The heaviest rain is likely around the midnight hour with storms beginning to taper off as the morning approaches. Cloudy conditions will stick around, and there is likely to be widespread fog thanks to all of the new moisture. Lows will be in the upper 60s and lower 70s. 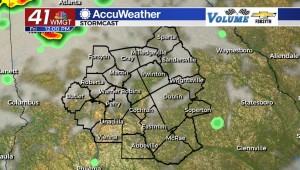 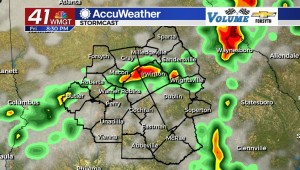 Friday will also be a cloudy day, however it should not be as wet as Thursday. Aside from the heavy rain during the extreme early morning hours, we should only see a few showers until the late afternoon and evening arrive. Highs will be a bit warmer as a result of the rain backing off, climbing into the low to mid 80s around Middle Georgia. Storms will reach their peak intensity during the late evening hours, tapering off once the sun sets.

Saturday should see some sunshine make a return to the region, and rain chances will reach their lowest since Wednesday. Some isolated storms are still likely during the afternoon, however. Highs will reach into the upper 80s and lower 90s as a result of the sunshine making a return, and lows will drop into the lower 70s.

Sunday should also see some sun, however it will likely be a bit less than Saturday. Rain chances will remain low until the evening when widespread scattered storms are likely to fire up. Highs will be in the upper 80s with lows in the lower 70s. 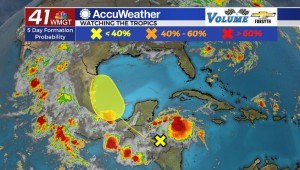 The tropics are still overall quiet with just the one cluster of storms near the Yucatán being watched. Formation chance within the next 5 days remains at 20%. 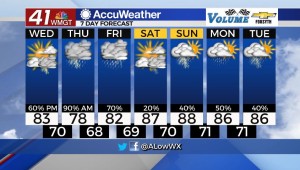