Cloud cover to return to Middle Georgia this afternoon

MACON, Georgia (41NBC/WMGT) – Clouds will return to Middle Georgia this afternoon ahead of our next storm system. 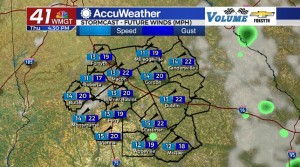 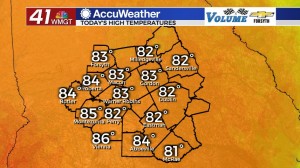 There is an abundance of sunshine to get things rolling on this Thursday. The sun will remain plentiful through the morning and into the lunchtime hours. However, during the middle of the afternoon (1-3 PM) we will likely begin to see some clouds moving into the region from the east. At the minimum our eastern counties will begin to see clouds during the later lunchtime hours. Wind will also be relatively breezy this afternoon as they come in at 10-15 mph from the northeast. Gusts could reach speeds of up to 25 mph. Highs won’t be quite as warm as yesterday; the region will mainly reach into the lower 80s this afternoon. A couple of isolated showers will also be possible ahead of the sunset. The best chance for those will also be in our eastern counties. 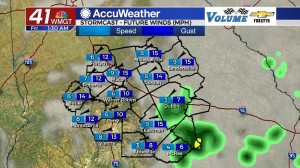 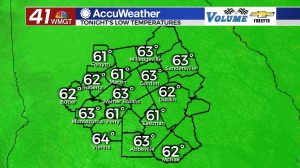 Cloud cover will continue to increase overnight, eventually reaching blanket or near blanket conditions across the region. Some more showers are likely around the region tonight as the system makes its way in. Lows will be warmed by the added insulation, only dropping into the low to mid 60s. Winds will still be northeasterly as well, but the speed should cut back to 5-10 mph. 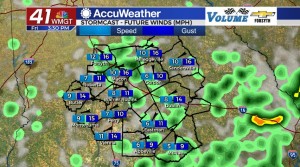 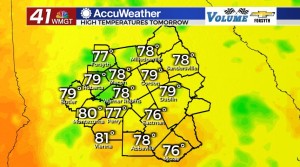 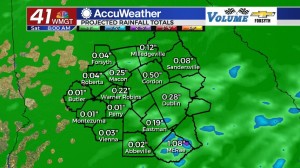 Our Friday will begin with plenty of cloud cover and likely a few isolated showers. The umbrella or a raincoat would be a good idea out the door as several scattered showers and thunderstorms are anticipated to come through during the afternoon. No severe weather is expected, however a storm or two could have some strong wind gusts. Highs will be kept cooler by the rain and added cloud cover, only reaching into the mid to upper 70s during the afternoon. The wind will still blow from the northeast, once again at 5-10 mph. Expected rain totals for those who see rain (which is most if not all of Middle Georgia) will be between .25″ and .5″, however some locally higher amounts will be possible. Rain will slow during the evening hours. 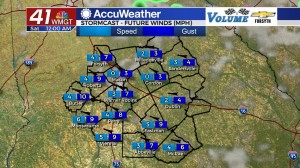 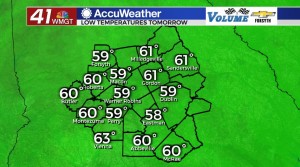 Cloud cover will begin to clear a bit once the sun sets. A couple of showers may linger early, but they won’t last into the middle of the night. The wind will finally begin to show some variability as it shifts slightly to the east for an east-northeasterly flow. The speed will also slow to about 5 mph. With the clouds breaking a bit, low temperatures should cool a bit as well, dropping back into the upper 50s and lower 60s.

The Weekend and Beyond

Temperatures will rebound quickly this weekend. On Saturday the skies will be partly cloudy throughout the day. Highs will warm into the mid to upper 80s around the region, jumping about 10 degrees from the afternoon prior. The wind will be variable at about 5 mph. A few scattered showers are possible during the afternoon and evening. Overnight lows will warm up as the heatwave moves in, only falling into the low to mid 60s.

Sunday will see mostly sunny skies with cloud fields that develop in the afternoon. Highs will climb into the lower 90s for most of the region. The wind will come from the south-southwest at 5-10 mph. There will also be a chance for some isolated showers during the afternoon and evening hours. Lows will remain above the 60 degree mark.

We will begin to see some spots push back towards the mid 90s on Monday. Again the morning will be sunny with cloud fields and scattered showers firing up in the afternoon and evening hours when it gets hot. Winds will be westerly at about 6-12 mph. Lows will remain above 60 degrees. 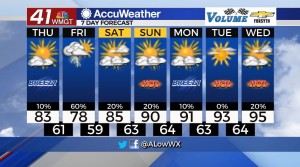