JEFFERSONVILLE, Georgia (41NBC/WMGT) — The citizens of Jeffersonville are being warned to boil water before consuming it for the next 3 days.

According to a social media post from the City of Jeffersonville, the city lost water pressure during a power outage, the power is back on and the water pressure is picking back up, but authorities are asking that in order to protect the public, all citizens boil city water prior to use for drinking, cooking, or preparing baby food.

They say the water should be boiled for at least one minute after reaching a rolling boil, and that citizens should continue boiling water until they’re notified by the City that the quality of water in the system is safe for human consumption again. The post says that this process should be finished in a 72 hour period,  in order to give samples enough time to process and show results.

After these tests have been taken, the city says that the public will be notified. 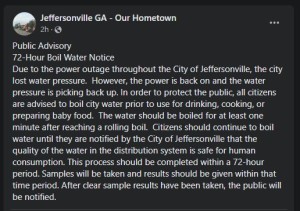