HAWKINSVILLE, Georgia (41NBC/WMGT) – A boil advisory has been issued for parts of Hawkinsville after a water main break. 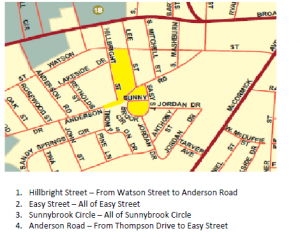 A city news release says a water main break at the intersection of Hillbright Street and Anderson Road Wednesday caused low water pressure for some customers and loss of water for others. The city is working to repair the issue.

The advisory is in effect for Hillbright Street, Easy Street, Sunnybrook Circle and a section of Anderson Road.

Those living in areas highlighted on the attached map should boil water for at least one minute after reaching a rolling boil prior to consumption until further notice.