BCSO arrests woman during “in-progress burglary”, suspect thought to be connected to 2020 burglary

(41NBC/WMGT) — The Bibb County Sheriff’s Office sent out a release Friday detailing an arrest made on Friday morning around 5:26 a.m.

According to the BCSO, a deputy was patrolling the 2400 block of Pio Nono Avenue when they saw that the front glass of the Family Dollar store had been broken. The deputy reports that he saw a female suspect dragging crates of merchandise outside of the store before attempting to flee when she noticed the officer. The suspect was arrested after a short chase on foot, and identified as 31 year-old Jaleise Chanel Mintz of Macon.

Mintz was taken to the Bibb County Law Enforcement Center where she was charged with the Family Dollar burglary, as well as served with an arrest warrant in connection to a commercial burglary from August of 2020, and she is being accused of breaking into a store and stealing lottery tickets off of Anthony Road. Mintz is being held without bond for two counts of Burglary as further charges pend investigation.

Anyone with information about these incidents is asked to call the Bibb County Sheriff’s Office at (478) 751-7500, or the Macon Regional Crimestoppers at 1-877-68CRIME. 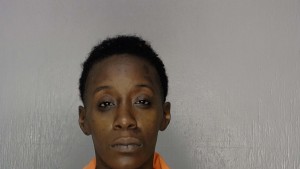