UPDATE: The man who police say left his identification card on the counter of the Macon dollar store he robbed was arrested Monday afternoon.

The Bibb County Sheriff’s Office says 42-year-old Carlos Rhodes was arrested at a residence off Log Cabin Drive around 4 p.m. Police say he used a knife to rob the Dollar General on Bloomfield Road of cigarettes.

The sheriff’s office says Rhodes is being held at the Bibb County jail without bond. He’s charged with Armed Robbery and has separate warrants for charges of Terroristic Threats and Shoplifting.

The vehicle that was used in the commercial armed robbery was also recovered.

The suspect began shopping and acted as if he was going to purchase a laundry basket and a knife still in the package. Once he approached the clerk, he asked to buy a pack of cigarettes.

The clerk said he was unable to sell cigarettes without identification. The suspect returned to his car to retrieve his ID.

After the knife was scanned, the suspect opened it up and used it to threaten the clerk in an attempt force him to fill the laundry basket full of cigarettes. The clerk refused and got out of the way, at which point the suspect began filling the laundry basket himself. Once finished, he fled in his vehicle. No injuries were reported.

However, once investigators arrived, they discovered the suspect’s ID was left behind on the counter. The ID belonged to Carlos Antonio Rhodes, a 42-year-old approximately 5’7″.

The vehicle was identified as a brownish/gray colored 2013 Nissan Altima with a Georgia tag reading CIH4525.

The photo attached to this article of Rhodes is from the Macon-Bibb County jail files.

If anyone knows the whereabouts of Rhodes, you’re asked to contact the Bibb County Sheriff’s Office at 478-751-7500 or  Macon Regional Crimestoppers at 1-877-68CRIME. 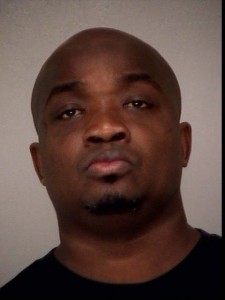