All modes of severe weather possible this afternoon in Middle Georgia

MACON, Georgia (41NBC/WMGT) – A couple rounds of severe weather are likely in Middle Georgia this afternoon/evening ahead of a cold front. 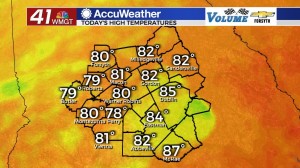 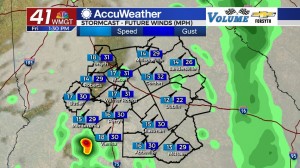 Following the warmest morning of the week, a weak line of storms arrived in Middle Georgia around 9:00 am. Those will have passed through the region before noon, leaving mostly cloudy conditions to stick around into the afternoon. Hopefully the sun does not come out much today, however if it does the instability of the atmosphere will further increase. High temperatures this afternoon are much lower than yesterday as they top off in the upper 70s to mid 80s. Due to the increased humidity, however, it will feel sticky and uncomfortable all afternoon. If the sun comes out, this feeling will be amplified. 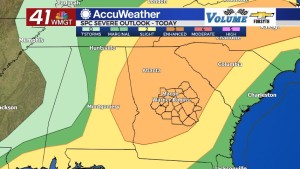 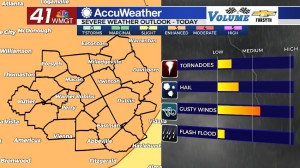 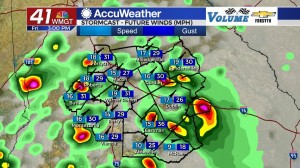 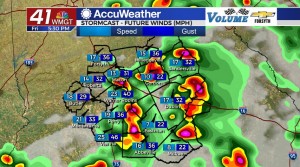 The risk for severe weather today in Middle Georgia is a Level 3 “Enhanced” risk, and it is in effect for all counties. A tornado watch will likely be issued for much of the Peach State heading into the later afternoon hours. It will likely remain in effect until 10 or 11 PM EDT tonight. The primary threats with today’s storms are going to be hail and strong wind gusts, however a few tornadoes are definitely on the table. The storms look to initially fire up as a bunch of individual cells which enhances the tornado threat. Even the models that are calling for the storms to arrive as a line have it arriving as a QLCS and not a straight line. A QLCS is a line that has parts that rotate embedded within the line. A few weeks ago when Middle Georgia saw the tornadoes come through was a QLCS system. QLCS tornadoes are not the strongest or longest tracking, however any tornado is dangerous and these still the potential for major damage and to be life threatening. Hail should for the most part remain small, however up to golf-ball size will be possible today. Ambient wind gusts (before the storms fire up) will likely be in the 30-40 mph range, so storm gusts could exceed 60 mph. 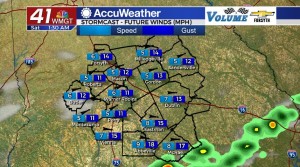 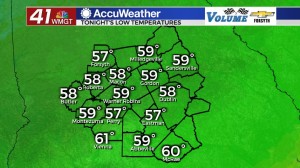 Once the storms eventually do merge into a line, they will continue to push east until they are out of the region. A few straggling showers may lag behind, but those shouldn’t have a severe risk. Rain activity will slow for most of the region by 10:00 pm, and all activity should be done by midnight or shortly thereafter. Cloud cover will clear for the most part as temperatures drop much lower than they have the past several days, bottoming out in the upper 50s and lower 60s. That’s about 10 degrees cooler than last night. Winds will still remain a bit breezy from the west at 7-12 mph. 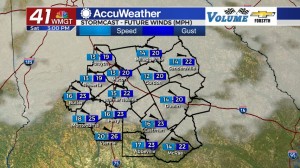 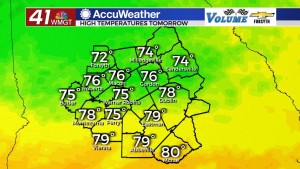 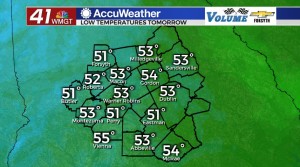 Saturday will see highs in the mid to upper 70s and partly cloudy skies as the back end of Friday’s storm system wraps around. This should not bring any rain to Middle Georgia, however the wind will still be pronounced as it comes in from the west-northwest at 12-17 mph. Gusts could reach speeds of 30+ mph during the afternoon. Overnight clouds will clear and low temperatures will drop into the lower 50s. Winds will come in from the north-northwest at 6-12 mph. 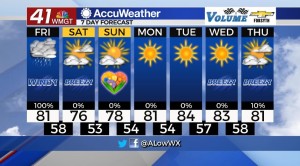