TRAFFIC ALERT: Portion of I-75 N in Macon-Bibb County blocked due to flooding

MACON, Georgia (41NBC/WMGT) – The Georgia Department of Transportation reports flooding on portion of I-75 in Macon-Bibb County Thursday morning.

According to a tweet from GDOT West Central, all lanes on I-75 northbound just before the merge with I-16 east are blocked. The tweet goes on to say flooding is the issue for the blocked road way. 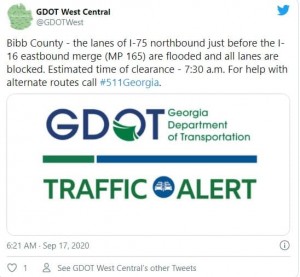 If you need to find an alternate route, GDOT says to call 511Georgia.