UPDATED AT 11:45 A.M.: Authorities identified the driver of the vehicle as 61-year-old Kenneth Lawrence and his passenger as 55-year-old Michael Vandergriff. The next of kin has been notified.

MACON, Georgia  (41NBC/WMGT) – 2 people are dead after an early morning car crash that ended in flames.

Bibb County Coroner’s Office personnel identified the next of kin for the driver of the vehicle. However, they were unable to identify the passenger. 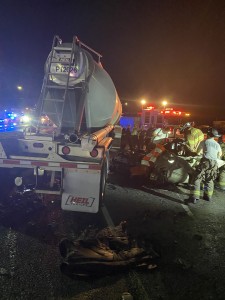 According to Coroner Leon Jones, a Ford Taurus hit a telephone pole while traveling on Broadway.  After that, the vehicle crossed a grass median, hitting a Freightliner tractor-trailer. The truck was stopped at a red light near Houston Road and Pio Nono Avenue. The impact of the crash pushed the trailer into a Chevrolet Impala that was also stopped at the light.

First responders transported the drivers of the tractor-trailer and Chevrolet Impala to Atrium Health Navicent, and are in stable condition. The crash is still under investigation.