GRAY, Georgia (41NBC/WMGT) -UPDATE: Augusta Prep says the students and bus driver were released from the hospital and back in Augusta. The golf coach, Chuck Mason, is still in critical condition in ICU at Navicent Health.

According to a Facebook post from the school, the golf team was headed to Perry when it was involved in a crash on Highway 49.

Chris Gray with Augusta Prep says 4 students, a coach, and the bus driver were all taken to Medical Center, Navicent Health in Macon following the crash.

The students are all expected to be okay.

Gray says the bus driver was alert at last check and that the condition of the coach is unknown.

The Head of School, Peter Huestis, is on the way to visit students and their families. 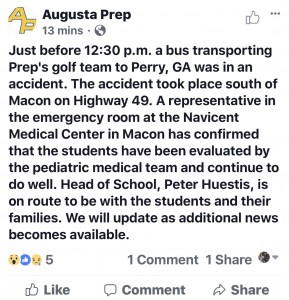