MACON, Georgia. (41NBC/WMGT) – After a wild week of weather in Middle Georgia, fall-like conditions will be in the forecast heading into the weekend.

A cold front that moved across the east coast Thursday has brought cooler, drier air into the Deep South.

High pressure will build up over the eastern half of the United States through the weekend, giving way to more sunshine and a northwesterly wind that will keep cooler air flowing into the southeast. 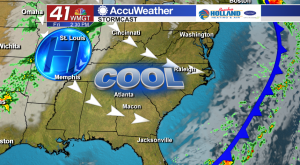 Temperatures will be trending close to normal on Friday in Middle Georgia.

Morning lows were mainly in the mid-upper 50’s, and temperatures are forecast to hit the upper 70’s in the afternoon.

According to the National Weather Service in Peachtree City, this time of year temperatures are normally around 54 degrees in the morning and 78 in the afternoon. 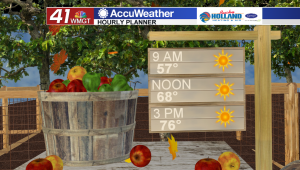 The seasonable weather continues through the weekend.

Temperatures will trend into the mid-80’s early next week before returning to the 70’s after a cold front moves through Tuesday. 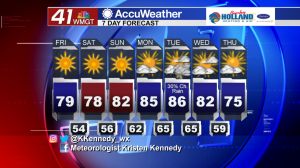