MACON, Georgia. (41NBC/WMGT) – Our mild and mostly dry weather this week in Middle Georgia will come to an end this afternoon. While widespread rain arrives tonight, colder air moves in throughout the day.

A high pressure system over the northeast is creating what’s called a “wedge front,” which is basically just colder air flowing down the east coast. 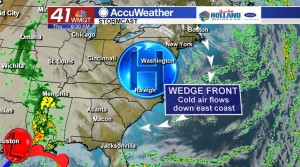 At the same time that cooler air is moving southward, a low pressure system will be spinning up a whole lot of moisture from the Gulf of Mexico.

A warm front will stretch into Georgia, transporting moisture across the state.

Both air masses – the cooler air from north and warmer air from south – will meet, causing air to rise and condense, leading to precipitation.

Isolated, light rain showers will arrive in Middle Georgia around 5 p.m. By 8 p.m, the rainfall should become more widespread and a little heavier.

Widespread rainfall will extend from Thursday night through Friday morning. Scattered rain will continue through Friday afternoon as wrap around moisture from this low pressure system persists across the southeast. 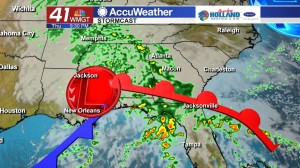 Rain chances will drop significantly heading into the weekend. An isolated shower or two may occur on Saturday and/or Sunday, but overall, it will be mostly dry.

Temperatures are forecast to stay in the mid-60’s to near 70 by Halloween – which as of this morning – shouldn’t feature any rain for trick-or-treating. 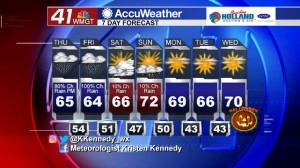