WARNER ROBINS, Georgia (41NBC/WMGT)- Air shows, ground shows, trucks on fire and a man pulling a C-17 aircraft all by himself.

The Thunder Over Georgia Air Show was jam packed with all of this and so much more.

This family friendly event had activities for the kids, food, recruitment tents, information for the public and of course, a unique opportunity to see what the Air Force has to offer in the sky.

The public is invited inside Robins Air Force Base gates Saturday and Sunday to experience it all.

Some of the key acts were the F-22 demonstration as they moved through the air.

The fifth generation fighter aircraft uses its stealth, super-cruise capabilities to go faster than any other plane it races.

Major Paul LOCO Lopez is one of the pilots for the F-22 and has been flying them for 8 years.

He still gets nervous before a show.

“I’m thinking about the magnitude, what I’m about to do as well as how privileged and fortunate I am to be in this position to showcase American air power to local Macon community at Robins Air Force Base,” said Lopez.

Other performances included a C-17 Globemaster demonstration, a flyover by an E-8C JSTARS, and of course, the Thunderbird’s. 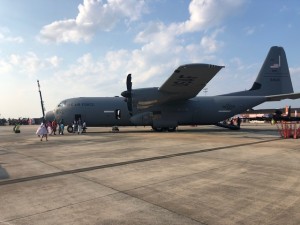 “When I was a kid, this dream seemed way unattainable for me, but you owe it to yourself with everything you have. I tell people you have to work hard… You have to set that goal, and you have to find smaller goals that are going to get you there,” Collins said.

Robins Air Show coordinators say the show takes 10 months of planning and gives the public an idea on what the Air Force can do.

According to coordinators, all aerial acts across the nation were asked to perform in the air show and whoever responded was added to the list of performers.

Coordinators say they expect more than 200,000 people to attend this year.

Military families joined the fun this weekend too.

12 year old Taylor Watkins came out with his dad. “People can learn about what these people do and how they protect their country,” Watkins said.

The Thunder Over Georgia Air Show brought the community together to appreciate armed forces and honor service members.