Suspect arrested on charges of rape and human trafficking

MACON, Georgia (41NBC/WMGT) – U.S. Marshals and the Bibb County Sheriff’s Office announced in a news release the arrest of a suspect accused of rape and human trafficking.

34-year-old Najiy Williams was taken into custody Thursday morning just before 9 a.m. without incident at an address on Rocky Creek Road.

He was charged with Rape and Trafficking of Persons of Labor or Sexual Servitude.

On February 18th of this year, deputies responded to the Greyhound Bus Station on Spring Street in response to a sexual assault on a female. The victim reported that she was assaulted in a room at the Rodeway Inn on Holiday Inn Drive North, and also claimed a black male she only knew as “King” was holding her against her will and forcing her into acts of prostitution.

She said she had been lured by the suspect to Macon with the promise of work from an online site.

An investigation was conducted with the assistance of the FBI, leading to five search warrants being served on February 18th on five different rooms at Rodeway Inn.

This investigation is still ongoing. Anyone with any information on the incident, or Williams, is asked to call the Bibb County Sheriff’s Office at 478-751-7500, or Macon Regional Crimestoppers at1-877-68CRIME. 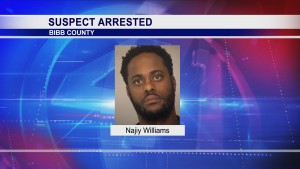