Super Bowl 52 on Sunday to be the Coldest on Record

MACON, Georgia (41NBC/WMGT) – Sunday’s Super Bowl will likely break records as the coldest Super Bowl with an outside temperature forecast of 7 degrees at kickoff. Luckily for players and fans, the game will be played indoors.

Super Bowl LII will be held inside U.S. Bank Stadium, home of the Minnesota Vikings in Minneapolis, MN. The New England Patriots will play the Philadelphia Eagles.

Sunday’s outdoor temperature in Minneapolis will be colder than average for early February. According to the National Weather Service in Twin Falls, the average high in Minneapolis on February 4 is 26 degrees, and the average low is 9 degrees. 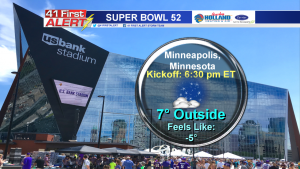 The previous coldest Super Bowl on record occurred was Super Bowl XVI. On January 24, 1982, the San Francisco 49ers played the Cincinnati Bengals at the Pontiac Silverdome in Pontiac, MI. The outside temperature was 16 degrees.

The coldest Super Bowl to be played outside was Super Bowl VI. The Dallas Cowboys took on the Miami Dolphins at Tulane Stadium in New Orleans, LA on January 16, 1972. The outside high temperature that day was 42; it was 39 at kickoff. 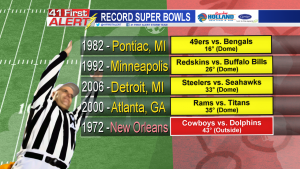 You can watch the Super Bowl this Sunday on 41NBC. Kickoff is scheduled for 6:30 p.m. ET.