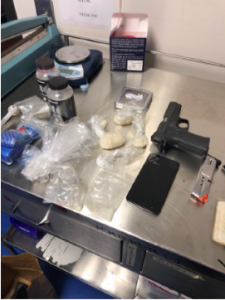 Warner Robins Police say an officer noticed a stolen car while serving an arrest warrant at a home in the 200 block of Ward Street just before 8:45.

The man, 38-year-old Joshua Isaiah Ruiz, was sleeping inside the car.

The officer detained Ruiz. A search of Ruiz revealed a handgun in his waistband. Officers found more than 70 grams of methamphetamine and 86 grams of an “unknown controlled substance” inside the car.

Police say Ruiz was also in violation of his probation.