MACON, Georgia (41NBC/WMGT) – Mostly cloudy conditions will stick with Middle Georgia Wednesday afternoon along with the possibility for a few showers. 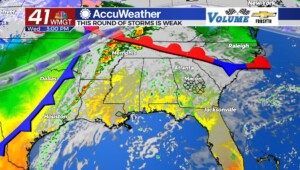 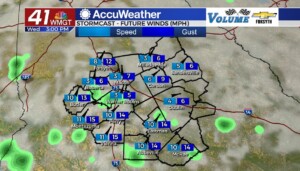 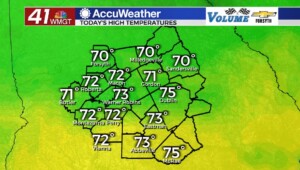 Warm and muggy conditions did not leave Middle Georgia following the showers yesterday evening. Instead, the cold front stalled to the north and became stationary, resulting in very little wind overnight for Middle Georgia. A dense fog formed as a result, and many areas of the region saw it linger until late this morning. The cloudy skies will remain with the region today as well; the stationary front to the north will become a warm front later today, however due to it already being north of the region there will be little change in Middle Georgia. Highs will largely be in the lower 70s this afternoon with ambient winds blowing from the south-southwest at 4-11 mph. Gusts will not be strong early, however heading into the evening hours they will likely push 15-20 mph. A few showers will be possible during the late afternoon and evening hours, but most of the region will stay dry. 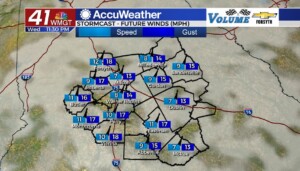 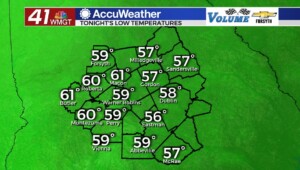 Tonight those breezes will linger as they shift more towards the south. Any showers from the afternoon should clear out well ahead of midnight. It will be the warmest night of the week as temperatures largely bottom out in the lower 60s and upper 50s. Due to the increased overnight wind speed, widespread fog is unlikely heading into Thursday morning. Some patchy fog will still occur in some areas, however, especially near bodies of water. 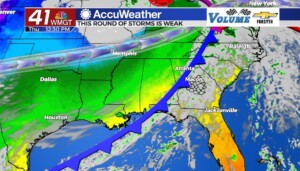 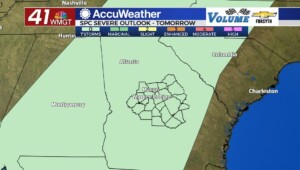 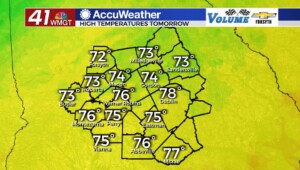 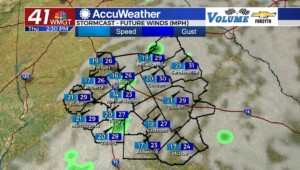 We will continue to see mostly cloudy conditions early for our Thursday before some pockets of sunshine come through during the late morning hours. Temperatures are expected to reach the mid to upper 70s across Middle Georgia Thursday afternoon. Despite the added heat and potential instability, the incoming cold front is so weak that there is no risk for severe weather tomorrow afternoon. By the time it arrives it will likely bring a few scattered showers (maybe a rumble of thunder) to the western counties that may not even reach the eastern counties. The other aspects of the cold front, however, will be decently noticeable. Winds will blow from the southwest at 10-20 mph with gusts pushing 30 mph during the day. 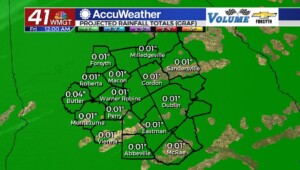 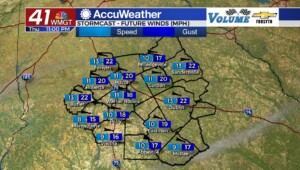 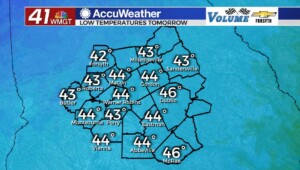 Once the cold front passes some clearing in the clouds will begin, and we should see mostly clear conditions for Thursday night. The wind will shift more towards the west-northwest at 6-12 mph. Gusts could still push 25 mph. Low temperatures will drop into the mid to upper 40s across the region. 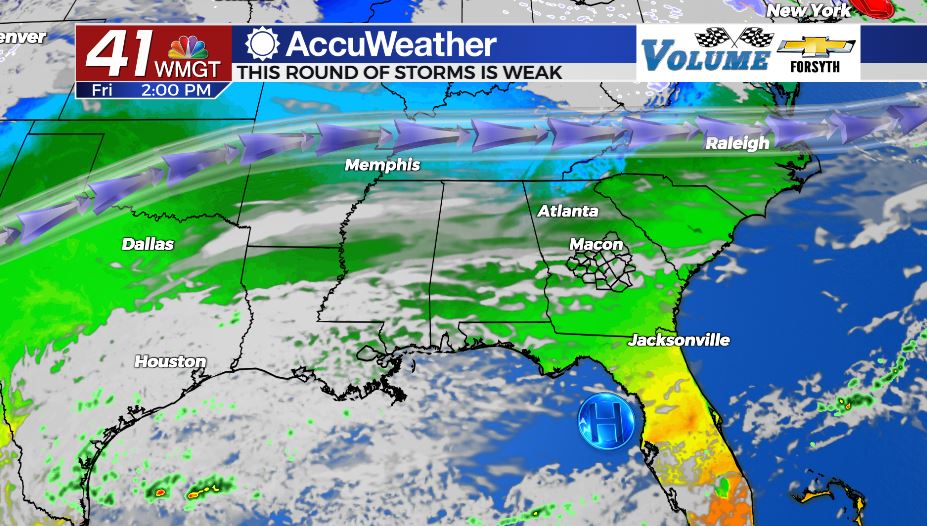 Friday will more than likely be the most pleasant day Middle Georgia sees in the next 7. It will be breezy from the northwest at 5-12 mph with gusts reaching up to 20 mph, and high temperatures will reach into the mid to upper 60s. The best part, however, is the sun will largely be back across the region. There will be a decent amount of cirrus clouds moving through during the day. The jet stream will be shifting from a meridional flow to a zonal flow, setting the stage for a wet and cloudy weekend across much of the Peach State. That cloud cover, in fact, will begin to move in overnight Friday and into Saturday. Low temperatures Friday night will be the coldest of the next 7 days as they bottom out in the upper 30s and lower 40s. 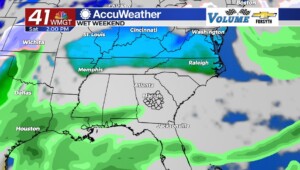 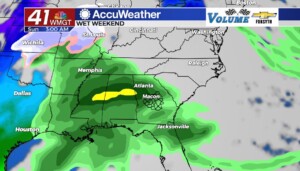 Saturday will be mostly cloudy with a couple of showers possible during the afternoon, however those rain chances will drastically increase overnight. Highs will be in the upper 50s with overnight lows only bottoming out in the mid to upper 40s. 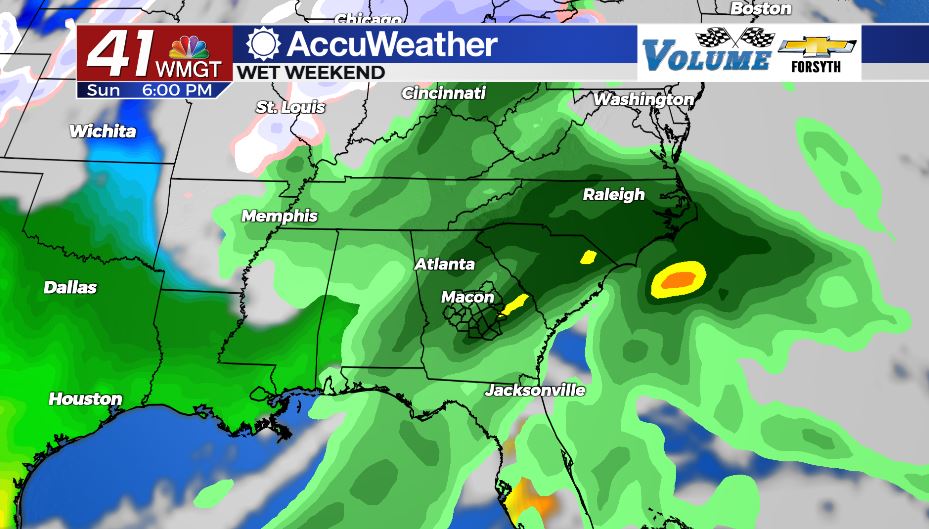 The widespread rain is expected to continue for much of Sunday. Flash flooding will be possible in many parts of Middle Georgia should the current forecast hold. Highs should be slightly warmer than Saturday afternoon – this due to winds from the southwest vs easterly winds on Saturday. Rain activity should slow for most of the region by Sunday night. 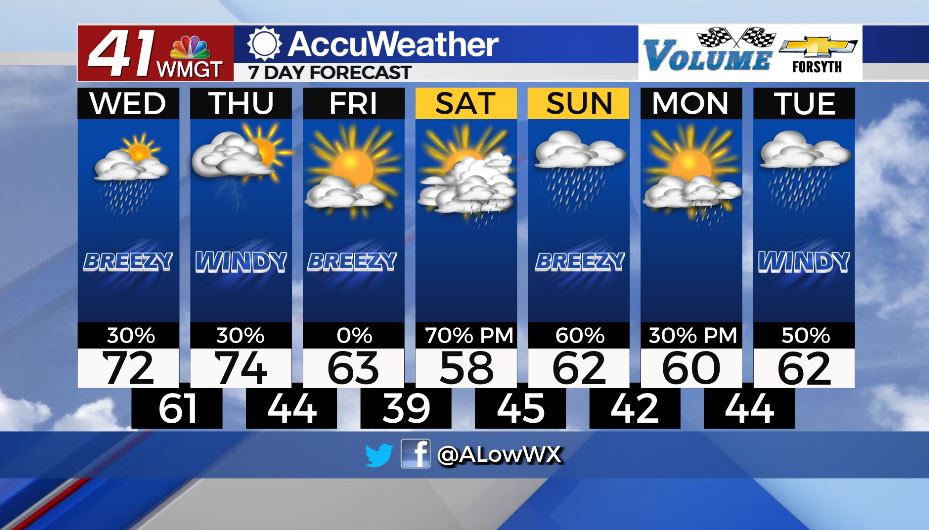