MACON, Georgia (41NBC/WMGT) — The Solid Waste Department is on a mission to stop illegal dumping in Bibb County communities.

Sanitation crews spent Tuesday cleaning Bells Terrace street in Unionville after it was reported that more trash, scraps, and abandoned items were blocking the road.

“They just use it as a city dump and it’s ridiculous,” Resident Julie Bowdoy said.

The Solid Waste Department removed tons of debris, scraps, and trash, but Bowdoy says illegal dumping continues to happen in her area. 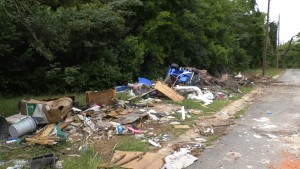 “They do it in broad daylight, they come back and we catch them, and they say, well everyone else dumps here why can’t we,” Bowdoy said. “Take it where yall stay at, we live here.”

It’s considered a hot spot, one man who wishes not to be identified has seen several people dump items in the street before.

“As I walk through here every day, I am a neighbor over here and I just shake my head because it’s not right for nobody to be dumping over here,” The man said. “ Even when they have signs over here.”

He says it’s time for residents to come together to address the issue.

“Somebody needs to talk up, and find out who’s dumping this, it could be toxic and could be killing people,” The man said.

Solid Waste Director Pat Raines says the estimated cost for the disposal fee was more than $400.

She says to help stop the problem, residents should know they can dump their waste at the landfill for free.

“All Macon-Bibb County residents with a valid Georgia ID can come to a landfill and then get a one time per month free dump up to 500 lbs,” Raines said.

If you spot anyone illegally dumping, you can take a picture and contact the Bibb county sheriff’s office.