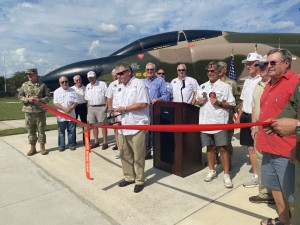 The 128th Tactical Fighter Squadron of the 116th Tactical Wing, flew the aircraft from 1983 to 1986. At the time, they were one of two Air National Guard units who were on the highly specialized Pave Spike and Maverick Systems.

Major General Tom Lynn says it’s an honor to come back and be apart of the celebration.

“It’s not only a dedication of F-4. It’s a celebration of all the great times I’ve had with these great Americans,” said Maj. Gen. Tom Lynn.

Six names are painted on the nose of the plane to honor their distinguished service.

The dedication kicks off a two day celebration on the base for the 80th anniversary of the 128th Squadron as the first air unit assigned to the Georgia National Guard.