Deputies were patrolling Radio Drive near Davis Street when they saw a Lincoln Continental fail to maintain its lane.

Deputies say they stopped on the car and approached the occupants. Authorities identify the occupants as 52-year-old Richard Wayne Horton and 33-year-old Brittany Nicole Booth of Macon.

Deputies also say as they approached the car, they saw both occupants moving around. Sheriff’s deputies said the two appeared to be hiding something in the car.

Authorities say they determined that Horton was driving on a suspended license.  Deputies had a K-9 search the car.

Authorities say that K-9 helped deputies find 4.4 grams of Methamphetamines and a pill bottle with three Xanax in it. 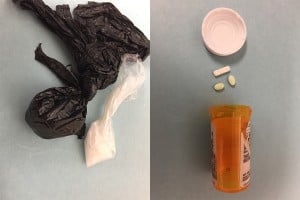 Deputies took Horton to the Bibb County Jail and charged him with Possession of Schedule II Controlled Substance. Authorities released him on an $8,450.00 bond.

Deputies took Booth to the Bibb County Jail and charged her with Possession of Schedule II Controlled Substance. Authorities said her bond at $8,450.00 bond.

If you have any information about this incident, call the Bibb County Sheriff’s Office at 478-751-7500. You can also call Macon Regional Crimestoppers at 1-877-68CRIME.