MACON, Georgia (41NBC/WMGT) – The ridge of high pressure that created beautiful, sunny skies and cooler high temperatures in Middle Georgia over the weekend will be pushed out of the way as a new system develops this week.

A warm front attached to another low pressure system will stretch from west to east Monday. Moisture will flow back into the atmosphere, resulting in an increase in cloud cover across Middle Georgia.

Cold, dry air will flow on the back-end of the system as a cold front produces some heavy rain across the southeast Tuesday. Rain is likely to enter Middle Georgia early Tuesday morning and last through much of the afternoon. 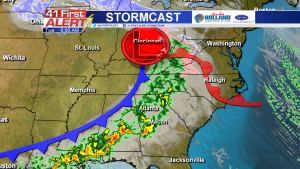 The highest rainfall totals will likely cover an area from mid-Mississippi, through Alabama and Georgia. Middle Georgia could pick up between 0.50 inch to slightly over one inch in some towns. 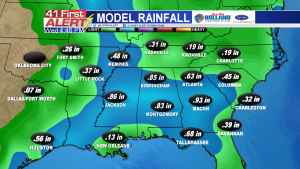 Behind the rain, comes another blast of cold air. Temperatures will dip well below average (67 degrees), especially on Thursday. Thursday will be the coldest day of the week with high temperatures only in the mid-50’s. 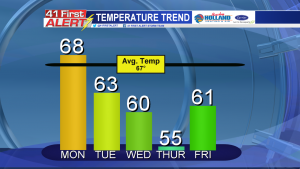 The cold front will bring cooler air down south, but also a few days of drier, sunnier weather. After Tuesday, rain chances will be minimal to non-existent until the weekend. 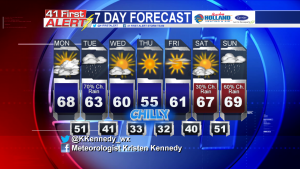