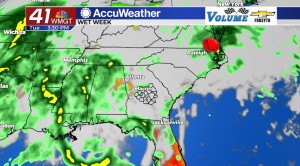 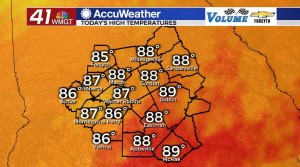 It was another cloudy morning on this final week of May, however unlike yesterday we did not wake up to heavy rain along with strong winds moving into the area. In fact, some of us got to see a bit of the sunrise. It is not going to be a sunny day today by any means, however we will likely see a few pockets here and there. The wind overall will be much calmer today as it blows at about 5 mph from varying directions. It will also be warmer; highs are expected to climb into the upper 80s. 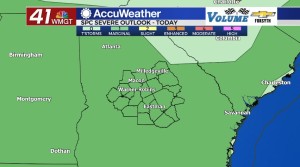 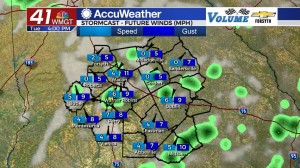 In terms of storm activity later on today, the Storm Prediction Center has issued a Level 1 “Marginal” risk for severe weather. This is more of a safety net than anything should something pop up, however with summer storms they don’t rotate, keeping the tornado risk near zero. Some small hail will be possible due to short lived intense updrafts, and some strong wind gusts will be possible as well due to intense downdrafts. Flash flooding, which was a concern yesterday, should not be a concern today given the short lived nature of these storms. 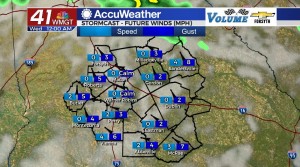 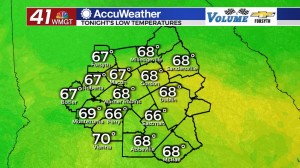 Tonight we could see a storm or two linger into the early overnight hours, however the activity will cut off by around midnight. Overnight winds will come in from the southeast at about 5 mph. The mostly cloudy conditions will stick around, keeping things humid and warm. Lows will again be in the upper 60s. 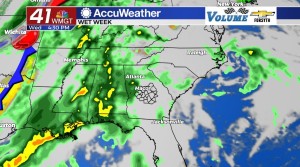 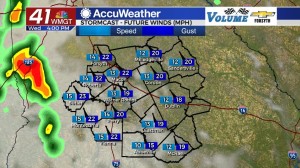 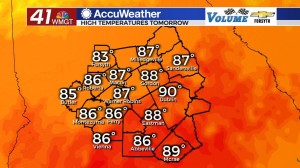 Rinse and repeat today. Highs will be in the upper 80s and maybe lower 90s. Skies will be overcast once again. The wind will be stronger from the southeast at 7-12 mph. Gusts could reach speeds of 25 mph. Isolated storms are likely around the region during the afternoon and evening. The overall chances for storms tomorrow are slightly less than today. 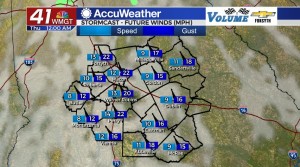 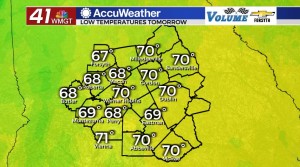 Overnight a few showers or storms may linger early, but they won’t last past midnight. Overnight winds will still be a bit breezy from the south-southeast at 5-10 mph. Gusts could still reach speeds of 20 mph. Lows will be in the upper 60s and lower 70s. 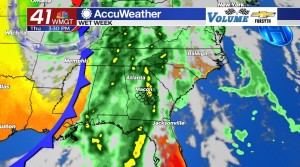 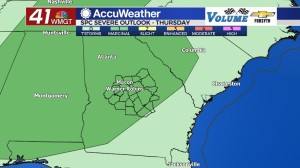 Our next (and maybe final) cold front of the spring will push through on Thursday. The SPC has already issued a Level 1 “Marginal” risk for severe weather on Thursday, however by the time it arrives it will likely be a Level 2 “Slight” risk. Primary threats will be strong wind gusts and hail, but an isolated twister or two cannot be ruled out. Highs will be in the mid to upper 80s and lows will drop into the mid to upper 60s. Rain may last through much of the overnight hours, or it may cut off early into the night. Models are still disagreeing on the timing of the arrival of the cold front. 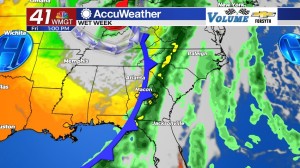 Friday will begin with a few clouds left and potentially a bit of rain in our southeastern counties (or, if the front is running behind, plenty of clouds and more widespread rain). Cloud cover will clear the first half of the day bringing on a sunny afternoon. Highs will be in the low to mid 80s and lows will return to the upper 50s.

The weekend will see plenty of sun early with a good chunk of scattered cloud cover in the afternoon as the back end of the low pressure system wraps around itself. This will keep the northern third of Georgia under mostly cloudy skies keeping them cooler, however we should still push into the mid to upper 80s around Middle Georgia. 90s look to return early next week. 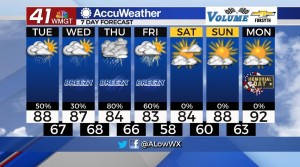