FORSYTH, Georgia (41NBC/WMGT)  — Thursday afternoon, the Monroe County Sheriff’s Office received a call from the Butts County Sheriff’s office regarding the pursuit of a vehicle driven by Kimberly Dye with a small child in the back seat of her car.

Monroe County Deputies located Dye in a Honda Pilot as she entered a Shell Gas Station off of Hwy 42 N. It was here that Deputies boxed the vehicle in before Dye attempted to leave. During this attempt to leave Dye drove into a Sheriff’s Office vehicle as well as a gas pump and then another vehicle.

The child in the back of Dye’s car was quickly secured and Dye was arrested, then transported to Monroe County Hospital for minor injuries. She will be charged by both the Monroe and Butts County Sheriff’s offices with multiple traffic violations, driving with a suspended license, DUI refusal, Aggravated Assault on a Police Officer and more. 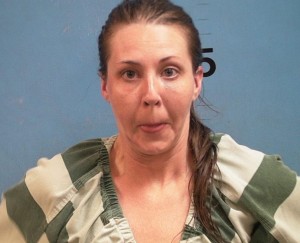