As he drove off, the Deputy was dragged about 30 feet down the road before falling from the vehicle.

FORSYTH, Georgia(41NBC/WMGT)— A man is in jail after attempting to flee from Monroe County deputies Thursday afternoon.

The Sheriff’s Office says a deputy stopped 37-year-old Samuel Brown on I-75 South at mile marker 188 in Forsyth. During the stop, Brown ran to his vehicle to get away from. 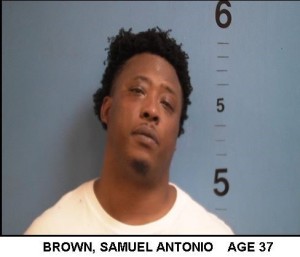 The Deputy tried to stop him from getting away. After a brief struggle, Brown was able to get in his car and drive away.  As he drove off, the Deputy was dragged about 30 feet down the road before falling from the vehicle.

After a short time, deputies located Brown’s vehicle wrecked on Rumble Road.  A witness to the crash told deputies a man ran off and pointed them in the direction he ran.

After searching the woods, deputies found Brown and took him into custody. He face charges of Aggravated Assault on a Police Officer, Interference of Government Property, Possession of Marijuana, Possession of a Controlled Substance, and several traffic violations.

The Deputy involved in the traffic stop was taken to the Monroe County Hospital and was treated for minor injuries. He has been and discharged.