MILLEDGEVILLE, Georgia (41NBC/WMGT) — A man has been arrested in connection to the stabbing death of a missing person in Milledgeville.

According to Brad King with the Baldwin County Sheriff’s Office, the Milledgeville Police Department was investigating a missing person case, looking for 24 year-old Brandon Harris of Milledgeville. During the investigation, officers found that 21 year-old James Bonner was driving Harris’ car in Macon. Authorities then arrested Bonner on an outstanding probation warrant from Baldwin County, bringing him and the vehicle back to the county.

Investigators then found probable cause through investigation to connect Bonner to the missing person case with Harris, this led authorities and the GBI to search the residence at 634 Browns Crossing Road, which resulted in authorities finding the body of Brandon Harris in the wood line behind the residence around 1-3 p.m. on Thursday, April 7th. He was found to have been stabbed to death sometime between Monday and Tuesday earlier this week.

James Bonner is being charged with Murder, Aggravated Assault, Theft by Taking Auto, and Concealing the death of another. 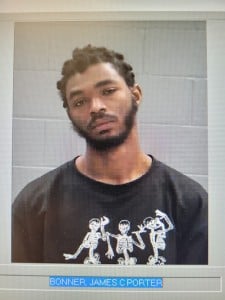