FORT LAUDERDALE, Florida (AP) — A party-ending curfew is in effect in Miami Beach, imposed after fights, gunfire, property destruction and dangerous stampedes broke out among huge crowds of people.

Hundreds of arrests and an emergency curfew aren’t stopping people from flocking to Miami Beach, and it’s not the only hot destination.

The curfew could extend through the end of spring break. The police chief described day after day of melees that had people fleeing for their lives before the city finally moved to shut things down. 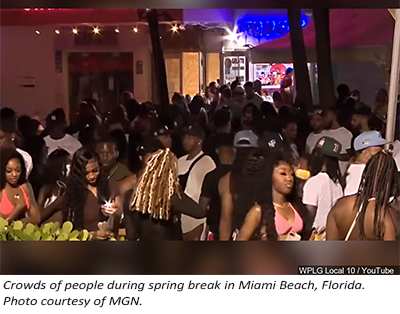 Miami Beach Mayor Dan Gelber is waving off some criticism that the crowd was targeted because it has been mostly Black.

South Florida has been a spring break hot spot in one of the few states fully open during the pandemic.

Let us know what you think