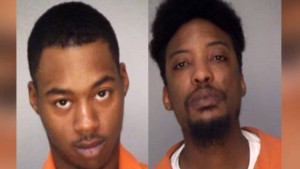 Authorities say Terrell Benjamin Grayer Jr., 37, and Anthony Maurice Wright, 20, robbed Zaxby’s on Hartley Bridge Road. They added that the suspects held an employee at gunpoint during the robbery.

Both defendants are innocent unless and until proven guilty in a court of law.