Brightmark is planning to build the world's largest plastics recycling and renewal facility in south Macon.

MACON, Georgia (41NBC/WMGT) — Brightmark is planning to build the world’s largest plastics recycling and renewal facility in south Macon, but the project has now potentially hit a road block.

We told you previously about concerns citizens have with Brightmark’s process called pyrolysis, which turns plastic into fuel. 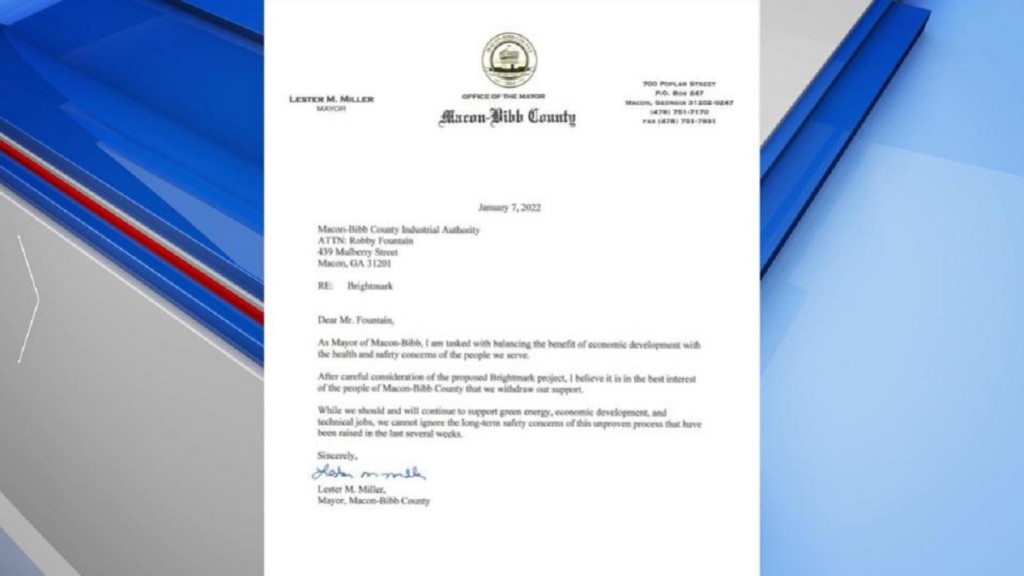 Mayor Miller sent this letter to the Macon Bibb County Industrial Authority on January 7 withdrawing his support of Brightmark.

On Friday, Macon-Bibb Mayor Lester Miller sent a letter to the Board Chair of the Macon-Bibb Industrial Authority, Robby Fountain, withdrawing his support of the project.

Mayor Miller says at the time they entered into the agreement, Brightmark was expected to exceed several expectations.

“There were certain requirements that we put in place that required a commercial operation to be fully open in Ashley, Indiana,” Miller said. “We wanted to see some proof that this process does what it’s supposed to do.”

Jessica Wahl, Renewable Energy Associate with Environment Georgia, is glad to see Mayor Miller withdraw his support of the project.

“This is a serious setback for a project that we think would be a serious detriment to Macon’s environmental health and public health,” she said. “And overall, a financially bad deal for the county as well.”

Mayor Miller says he conducted his due diligence during the last year, and no longer thinks Brightmark is a good fit for Macon-Bibb.

“There’s some long-term concerns out there, and it may be better for another community at a later date,” he said. “There hasn’t been enough progress to satisfy me during this year that we gave them. As of December 31, they indicated they had not been able to complete that.”

Wahl is unsure if Mayor Miller pulling his support means the project won’t happen, but Environment Georgia is hopeful his decision will convince more Macon-Bibb leaders to follow his lead.

“It would be great if other political leadership in Macon could come out against Brightmark,” she said.

Wahl says she would like to see the Macon-Bibb County Industrial Authority formally reject Brightmark’s proposal.

We reached out to the Macon-Bibb County Industrial Authority for an interview, but no one was available.

MBCIA did confirm in a statement that it received the Mayor’s letter. The statement says MBCIA plans to take the concerns under advisement to comply with the agreements in place with Brightmark, the state and other project stakeholders.