MACON, Georgia (41NBC/WMGT) – Deputies arrested a man for having drugs and fighting a deputy.

On March 31 around 12:30 p.m., Bibb County Sheriff’s deputies responded to a call on the 1500 block of Wellworth Avenue.

Authorities say the incident happened when they saw a car parked in front of the residence. When the deputy went to make contact with the driver, he exited his car.

Deputies say they smelled marijuana coming from the driver, 37-year-old Jerry Lee Neal. When the deputies asked Neal questions, he turned and ran away.

Deputies caught and detained Neal after a brief struggle. The passenger in the car fled on foot.

Deputies say they searched the car and found two containers of marijuana and three ecstasy pills.

Authorities arrested Neal and took him to the Bibb County Jail. Authorities charged Neal with the following: 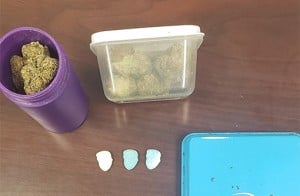