A 4-year-old is dead and his grandmother is arrested after the child accidentally shot himself with a gun found in the home.

MACON, Georgia (41NBC/WMGT) – A 4-year-old is dead and his grandmother is arrested after the child accidentally shot himself with a gun found in the home.

According to a news release from the Bibb County Sheriff’s Office, the 4-year-old, later identified as Kameron Ross, found a gun and shot himself at Pendleton Homes Apartments, located at 3401 Houston Ave , just after 8:30 Friday night.

A call came into the E-911 Call Center in reference to a child shot. It was reported that a male child was being transported by private vehicle to the  hospital for treatment, where he was later pronounced dead.

Investigators say the firearm Ross found was brought into the apartment by two male  juveniles, ages 14 and 16, who both live in the home.  Investigators interviewed all witnesses and the two juveniles were released into the custody of  family.

The grandmother of Ross, 50-year-old Kawana Liggins, was arrested and charged with tampering with evidence. At this time, this incident is still under investigation and additional charges are pending. 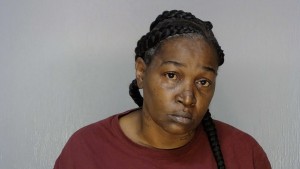