Late week warm up after a cool start in Middle Georgia

MACON, Georgia (41NBC/WMGT) – After a rather cool week across Middle Georgia, temperatures will be trending upwards through the weekend.

According to the National Weather Service in Peachtree City, the average high temperature in Macon is 69 degrees, and the average low temperature is 43 degrees for the dates of March 11, 12, 13 and 14. 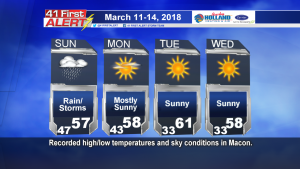 Winds will shift to the west and southwest as a warm air mass lifts north from the Gulf of Mexico over the southeast. Temperatures Thursday will top out in the mid-upper 60’s in Middle Georgia. 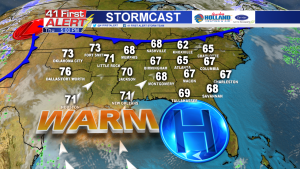 Temperatures will continue too trend upwards, breaking into the 70’s Friday afternoon. The warm air will stick around this weekend and into early next week.

A cold front will bring rain back to the forecast starting Saturday morning. As of Thursday morning, forecast models showed scattered showers Saturday morning and afternoon becoming more isolated Sunday. A better chance for rain comes into play Monday with a stream of moisture over Georgia. 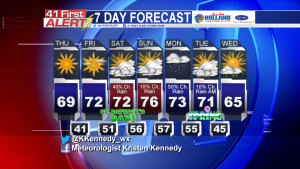