WRIGHTSVILLE, Georgia (41NBC/WMGT) — The Johnson County Sheriff’s Office arrested a 21 year-old and a 20 year-old for drug charges on Saturday, April 9th after a traffic stop.

According to a JCSO social media post, deputies performed a traffic stop on State Route 15 South of Wrightsville on a Lexus GS350 for window tint violations.

Deputies smelled a strong odor of marijuana from the vehicles, and called for assistance to search the vehicle. Authorities recovered about 585.26 grams of marijuana.

21 year-old Jatuivus Cannon and 20 year-old Aaliya Thomas were arrested and charged for felony possession with intent to distribute marijuana. 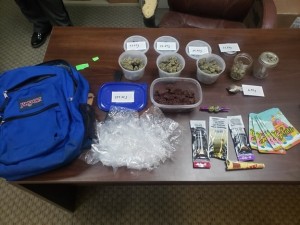