More than 30 arrests made in ‘Operation Blueprint’ in Macon

MACON, Georgia (41NBC/WMGT) – More than 30 people are facing charges following an investigation involving Bibb County investigators and the Office of the District Attorney. 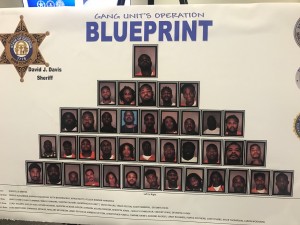 32 arrests were made following an investigation into a number of cell phones found on Bibb County inmates.

“It started spider webbing out to where more and more people became identified and became involved in the furtherance in some of this gang activity,” said Sheriff David Davis.

Authorities say they were able to make more arrests after wire tapping the devices.

“You’re going to get caught and when we catch you. We’re not going to tell you right away,” said District Attorney David Cooke. “First, we’re going to put taps on your phone so we can prosecute you and your co-conspirators.”

The investigation, which began in March, led authorities to a number of weapons, drugs, clothes, shoes, and money.

“In the hands of inmates, cell phones become dangerous tools. They can be used to continue criminal activity on the street, although a person is behind bars,” said Cooke. 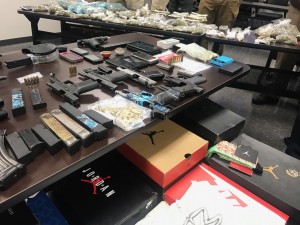 “It does show that this community has a problem and we all need to work together as a community,” said Sheriff Davis. “The Sheriff’s Office, the DAs office, the U.S. Marshall’s service. We’re doing what our first priority is and that’s enforcement and prosecution.