So what is a conjunction?

From Tony Rice, NASA Ambassador:
“Think of the planets like cars on a race track. Earth completes a lap in a year, Jupiter 11.9 years, Saturn 29.46. Conjunctions occur when a speedier planet like Jupiter overtakes and passes one on an outside line. Because Saturn is still moving in its 29.5 year orbital period as Jupiter makes its 11.9 year trip around the Sun, Saturn-Jupiter conjunctions occur every 19.6 years. But not all conjunctions the same, which is why this one is noteworthy.

The lanes of the solar system speedway aren’t level. Measured in degrees of inclination, Jupiter’s orbit is tilted 1.3º, Saturn’s 2.5º. So, when Jupiter overtakes Saturn, they can be separated by nearly 4 degrees or a lot less.”

Pretty much it is when two objects (planets) appear aligned or very close in the sky.

Why is this cool?

Conjunctions involving the outer planets (like Jupiter and Saturn) are far more rare because these planets take so long to orbit the Sun.  Jupiter and Saturn are in conjunction every 19.6 years, but this one is particularly close.

More from Tony Rice:
“The “great conjunction” of Jupiter and Saturn on Dec 21 is the 18th closest in the 430 times this has been/will be visible between 3000 BCE and 3000 AD. To find a closer Jupiter-Saturn conjunction you have to go back to July 16, 1623 but the pair were within 13 degrees of the Sun, lost the twilight. The conjunction on March 4, 1226 would have been visible. They were separated by 2 arc-minutes or about 1/15th the Moon’s width.

The next really close (under a degree) conjunction will occur on Mar-15 2080 when Saturn and Jupiter will be a few arc seconds closer.”

How to see it: 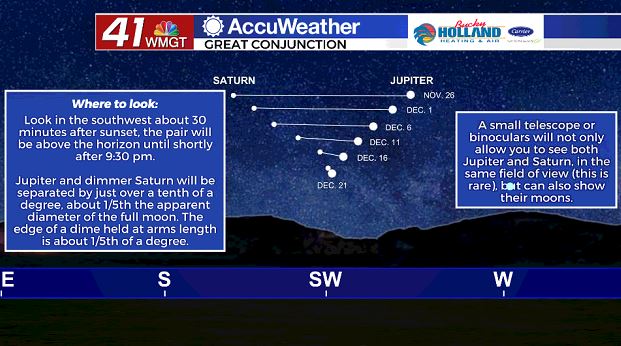 Look in the southwest about 30 minutes after sunset, the pair will be above the horizon for around and hour to hour and a half.

As they continue to set, the Moon illusion will make them seem further apart.

Although in general you will be able to view the conjunction with the naked eye, a small telescope or binoculars will allow you to view not only Jupiter and Saturn, but also their moons.

If you catch a cool shot of the conjunction send your photos to weather@41nbc.com or creeves@41nbc.com!