MACON, Georgia (41NBC/WMGT) – A teen went to the hospital because of a fight at the Macon Regional Youth Detention Center.

Now the family of the 16 year-old from Columbus is preparing to file a lawsuit against the Department of Juvenile Justice.

They say the injuries the fight caused could’ve been avoided had the detention center taken more precautions.

Jeriel Sheppard says he knew his son staying at Macon Regional Youth Detention Center would change the teen’s life forever, but he never imagined it would change like this. 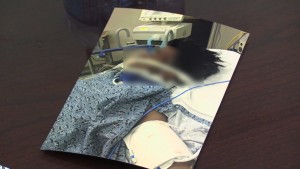 The GBI and Department of Juvenile Justice are looking into the fight on March 25th that left Jeriel’s son in a coma.

“This incident occurred on Saturday–well on Monday the Department of Juvenile Justice contacted GBI to send some agents up there to investigate the fight that had occurred earlier.”

Special Agent with the GBI J.T. Ricketson says this is the Bureau’s first time in at least 3 years getting called to investigate at the youth detention center.

But after Sheppard spoke with his son, he says this fight was no isolated incident.

“He was only there for a week. During that week there was three incidents where he was assaulted. The first time he was on the basketball court and the guy punched him in the face,” said Sheppard

The GBI’s investigation focuses only on the March 25th fight between the two teens–not what did or didn’t happen that led to the opportunity for blows.

“We identified who witnessed the incident and as far as our investigation, we’re only focused on the incident we do not look into administrative procedures why they had everybody in one room or anything like that.”

Sheppard says his son was afraid to tell administration about what happened before the fight.

“He was told by the guard not to report the incident or he would lose his phone privileges,” he added.

“The Georgia Department of Juvenile Justice (DJJ) confirms an incident occurred on Saturday, March 25, 2017 involving two teens in custody at the Macon Regional Youth Detention Center (RYDC). At this time the incident is being investigated by the DJJ Office of Investigations. To maintain agency transparency in the case, DJJ also made an official request for onsite assistance from the Georgia Bureau of Investigation. The GBI is currently handling the criminal investigation. Because that joint investigation is active at this time, this department can release no further details in the ongoing investigation.”

The DJJ declined to comment on the protocol or day to day procedures of their youth detention centers.

Sheppard and his lawyer Derrell Dowdell say they have questions…

“How many guards were on duty, where was his counselor, gang activity that are related to this case where the guards might be affiliated with gangs that are associated with the youth in Macon against youth in Columbus, Georgia.”

But his biggest concern is his son’s safety–while he’s being taken care of by the state.

Since the incident, the teen has been moved to another youth detention center in Columbus but his family says they plan to sue for damages. Sheppard says he is unable to speak, suffering severe memory loss and unable to walk on his own.

Dowdell says they’ve drafted letters to both the hospital for releasing the teen and the detention center putting them on notice that the suit will soon be filed. A spokesperson for the law firm says it’ll be filed in the coming weeks.