FORT VALLEY, Georgia (41NBC/WMGT)— The Fort Valley Mayoral race experienced some back and forth on whether or not candidate Jeffery Lundy could officially run for city office.

The Georgia Supreme Court denied an appeal Wednesday, from the city fighting a Superior Court Judge’s ruling that placed him back on the ballot. Now Lundy faces candidate LeMario Brown for Mayor.

“A ruling was made to validate that there was nothing illegal, unlawful, or fraudulent when I first went and filed to become the next mayor of Fort Valley,” said Lundy.

LeMario Brown says he wasn’t involved with the residency issues Lundy faced. He says he welcomes the challenge of an opponent.

“I welcome the competition. Especially if the people of Fort Valley are going to have the chance to voice their opinion and pick the right person fairly and equitably,” said Brown.

Lundy says God told him to run for Mayor. He’s retired from a 30 year career in law enforcement. Now he’s a pastor for Love and Kindness Ministry in Fort Valley.

If elected, he wants to focus on business, public safety, and education. He also wants feedback from residents on how to better the community.

Brown runs a small business and farm in Peach County. He’s also held the at large council seat for the last six years.

He wants to revitalize downtown and blighted areas. He also wants to build relationships with organizations in Fort Valley. Brown says his experience as a councilman will help move the city forward. 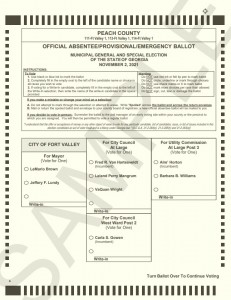 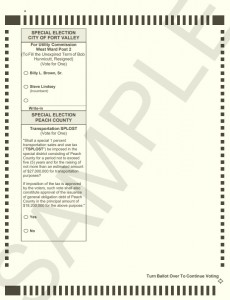 Early voting lasts until October 29. Election Day is November 2. You can view a sample ballot above.

We did request the filing documents for the Mayors race from Fort Valley, but have not received them at this time.