And next year, he’s returning home. Mosley announced on Twitter Wednesday, he committed to Mercer University. 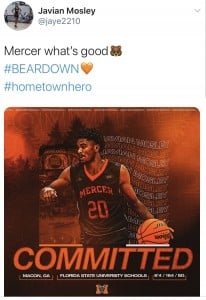 He chose Mercer over schools like North Carolina A&T and Oakland University located in Rochester, Michigan.

Mosley’s one of the top prospects in the class of 2021. He averaged nearly 22 points, over five rebounds and three assists his junior year at Westside.

He was named Junior of the Year by HypeSouth Media. He also helped lead the Seminoles to a 20-9 overall record, 11-1 in the region, and a Sweet 16 berth in the state playoffs.

“They really wanted him. They came to a lot of games last year,” said Westside head basketball coach Josh Grube. “They are getting a kid that can put the ball in the hole. He can score from anywhere on the court. So, they’re getting a kid that I know they got high expectations for and he’s going to really be able to score that basketball for them.”