The report also says she was hungry and had to use the restroom. She says she urinated in a trash bag, tied it up and left it inside the trash can.

MACON, Georgia (41NBC/WMGT)— A former Sergeant is appealing his termination from the Bibb County Sheriff’s Office, after an internal investigation found him to be at fault for leaving a 14-year-old, who was seven months pregnant at the time, inside of an interrogation room for nearly 24 hours. 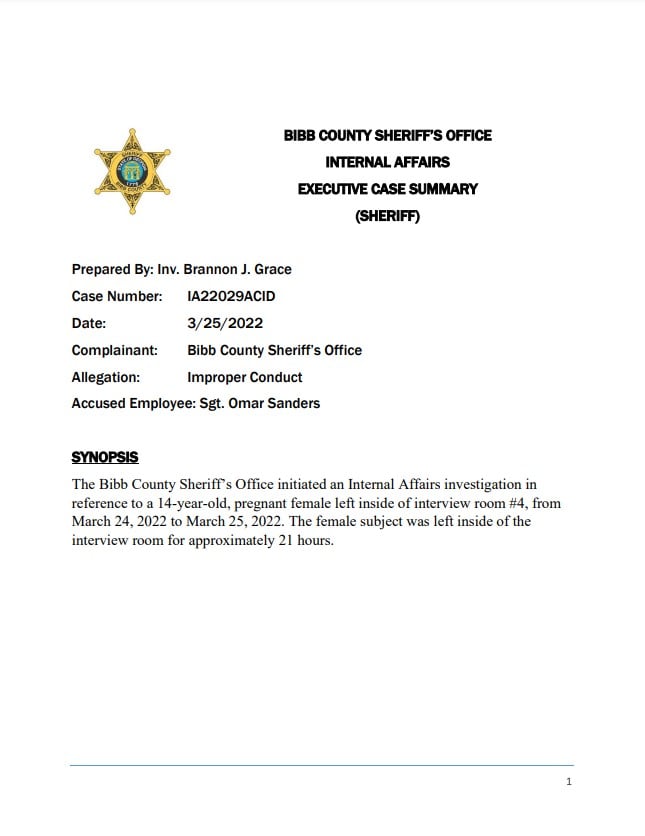 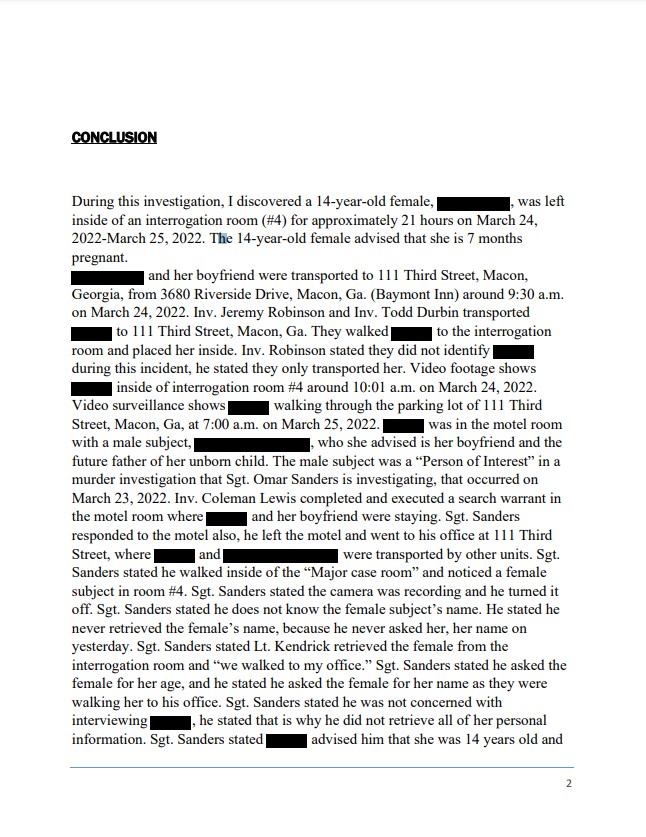 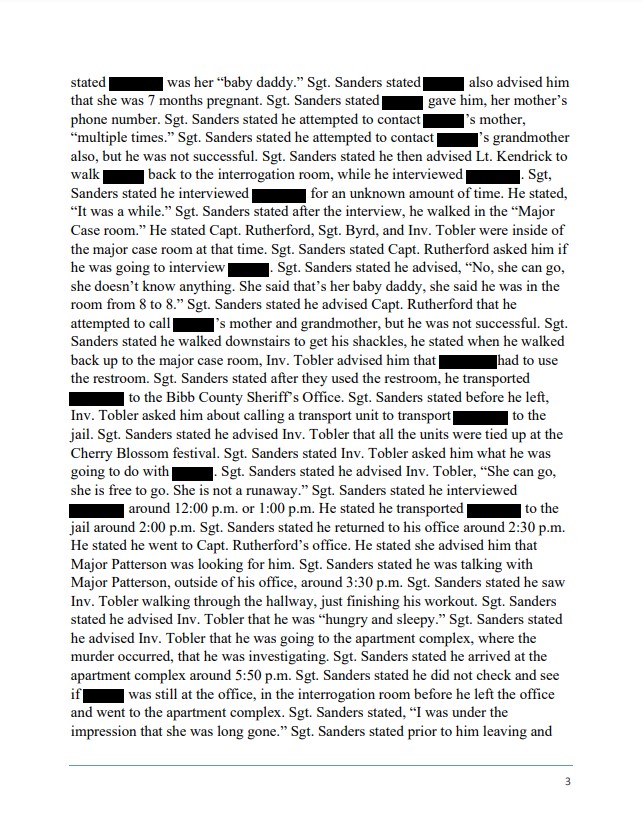 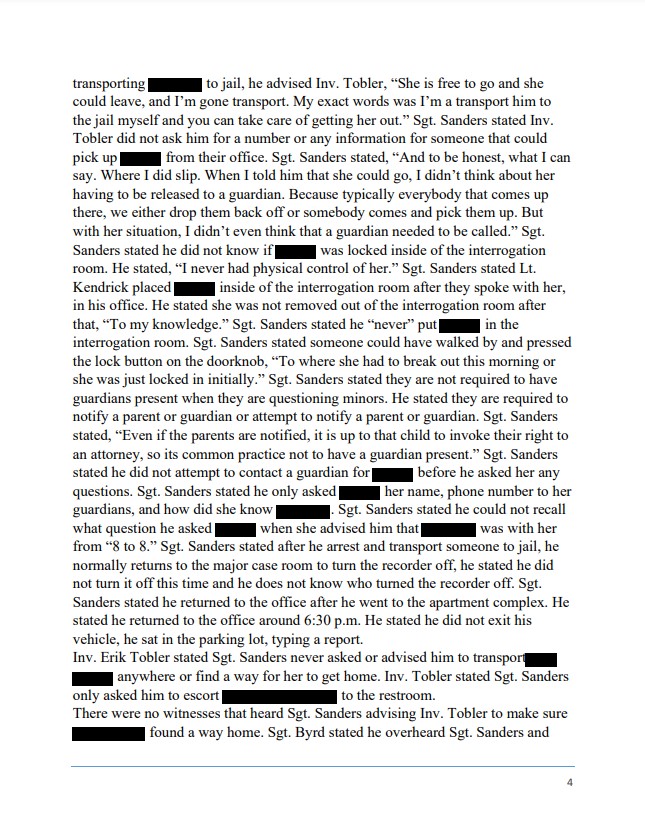 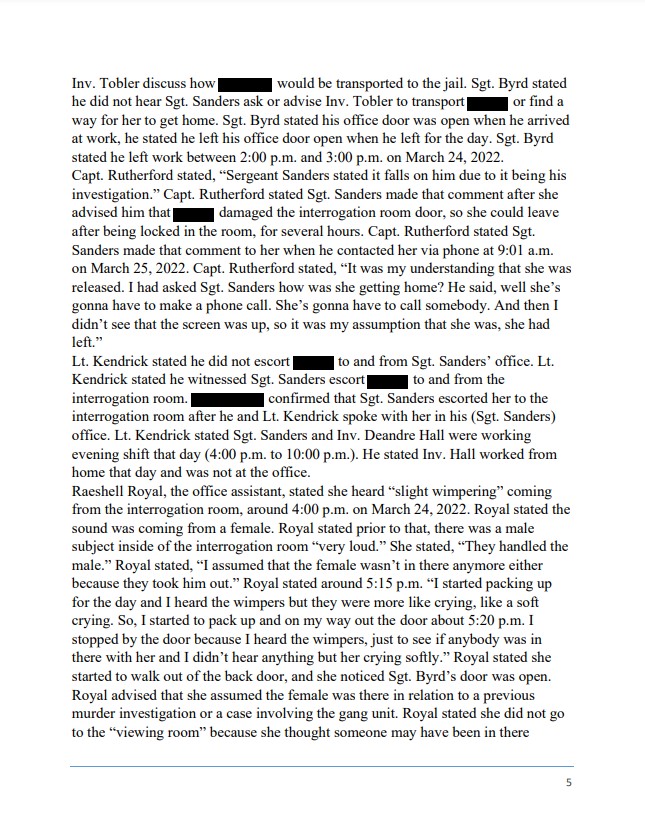 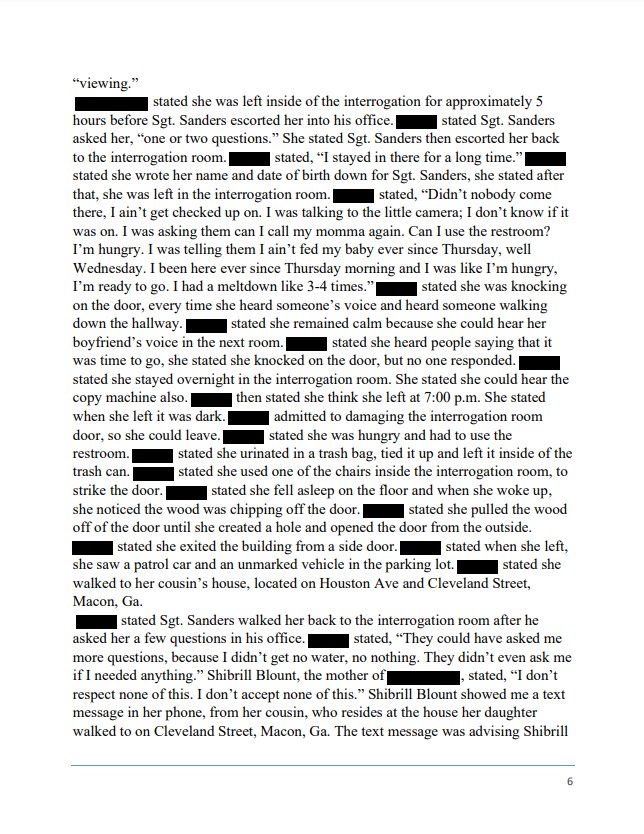 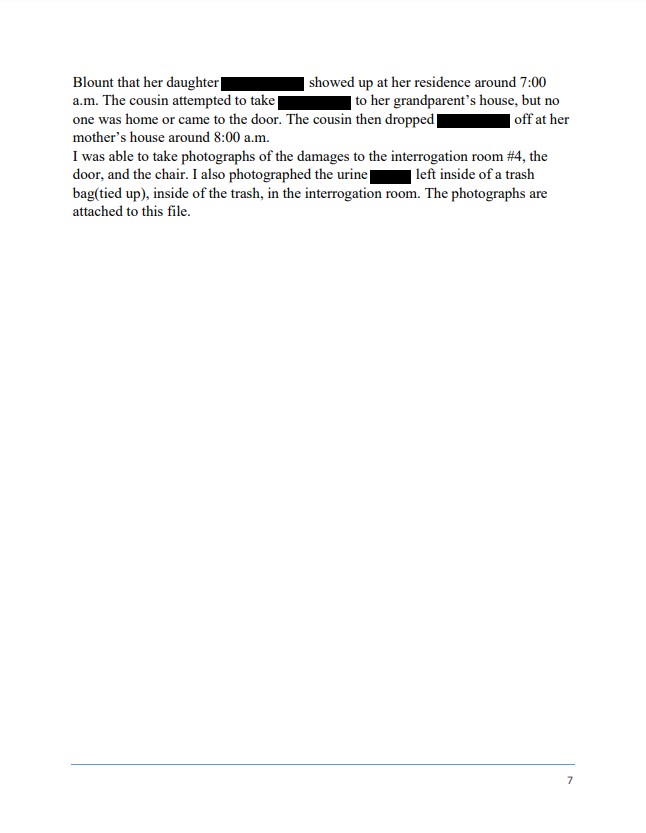 According to a report we obtained from the Bibb County Sheriff’s Office, two investigators brought the teenage girl and her boyfriend to the Sheriff’s Office Downtown Annex on March 24 at 9:30 a.m.

Her boyfriend was a person of interest in a murder that Omar Sanders was investigating. Sanders claims another deputy retrieved the girl from the interrogation room so he could ask her a few questions, but said he didn’t need her for questioning in the investigation.

Sanders says he tried to contact the girl’s mother and grandmother, but was unsuccessful. Sanders also said he told another deputy she was free to leave.

The report states that he was in and out of the office that day, but thought she left by mid afternoon on March 24. It also states the girl says she knocked on the door every time she heard someone in the hallway.

“Didn’t nobody come there, I ain’t get checked up on. I was talking to the little camera; I don’t know if it was on. I was asking them can I call my momma again. Can I use the restroom? I’m hungry. I was telling them I ain’t fed my baby ever since Thursday, well Wednesday. I been here ever since Thursday morning and I was like I’m hungry, I’m ready to go. I had a meltdown like 3 to 4 times.”

She said she remained calm because she could hear her boyfriend in the next room. She says she heard people saying it was time to go, and then knocked on the door but no one responded.

The report also says she was hungry and had to use the restroom. She says she urinated in a trash bag, tied it up and left it inside the trash can. The girl was in the interrogation room overnight.

She used a chair to try and break down the door, but was unsuccessful, At one point she fell asleep on the floor. When she woke up, she noticed wood was chipping off the door. She then pulled on the wood to create a hole to open the door from the outside.

After getting out of the room, she left the building out of a side door and walked to her cousin’s house on Houston Avenue and Cleveland Street in Macon.

The girl’s mother, Shibrill Blount, apparently showed a text from the day in question to the internal investigator that came from the girl’s cousin. The text message said her daughter showed up to her home at 7 a.m. on March 25.

Video surveillance shows her walking through the parking lot of the Sheriff’s Office Downtown Annex at 7 a.m. on March 25.

We received the termination letter for Sanders. Itstates he violated multiple rules of conduct for the Sheriff’s Office during this incident. 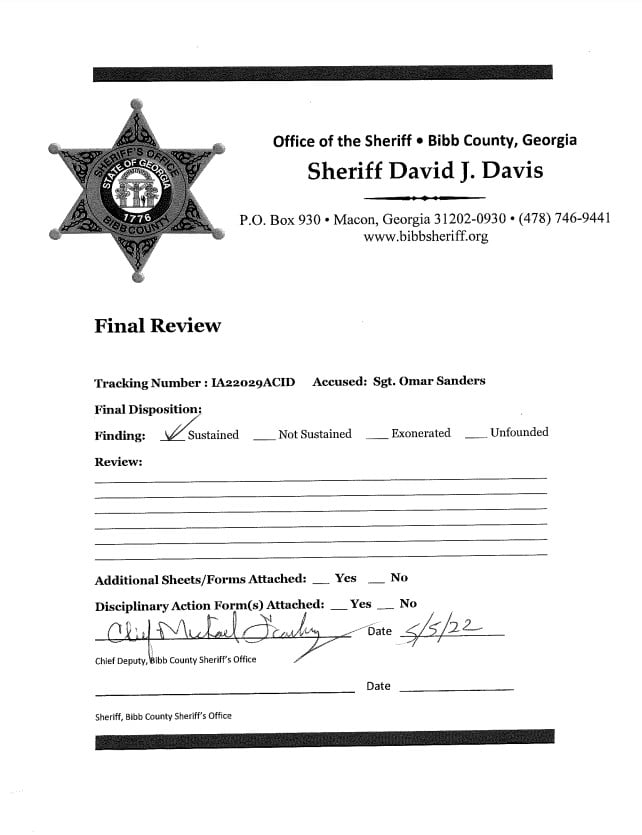 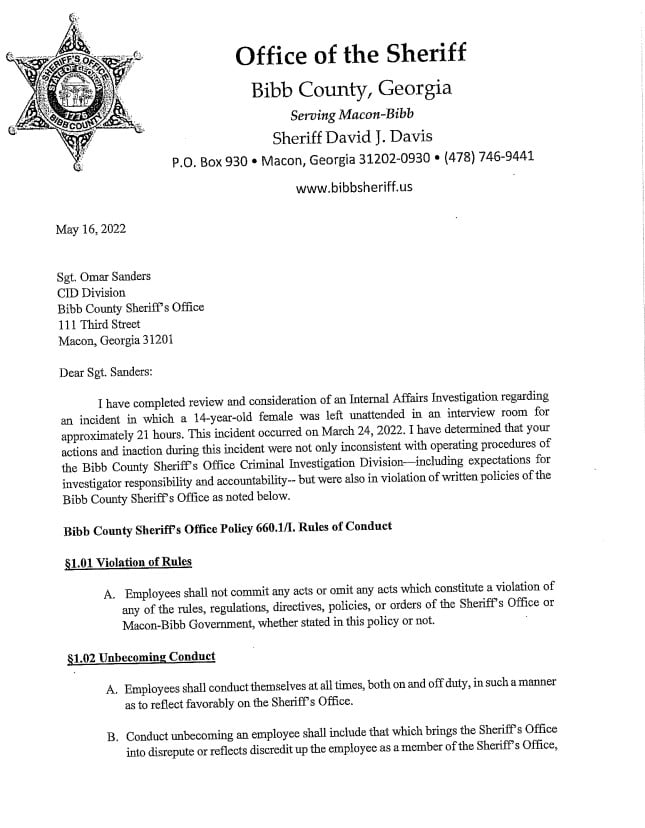 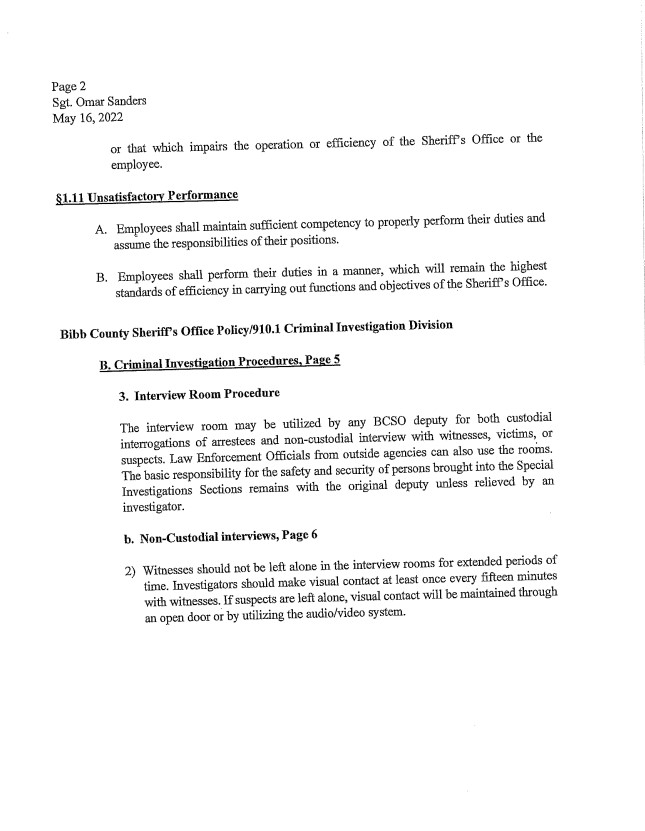 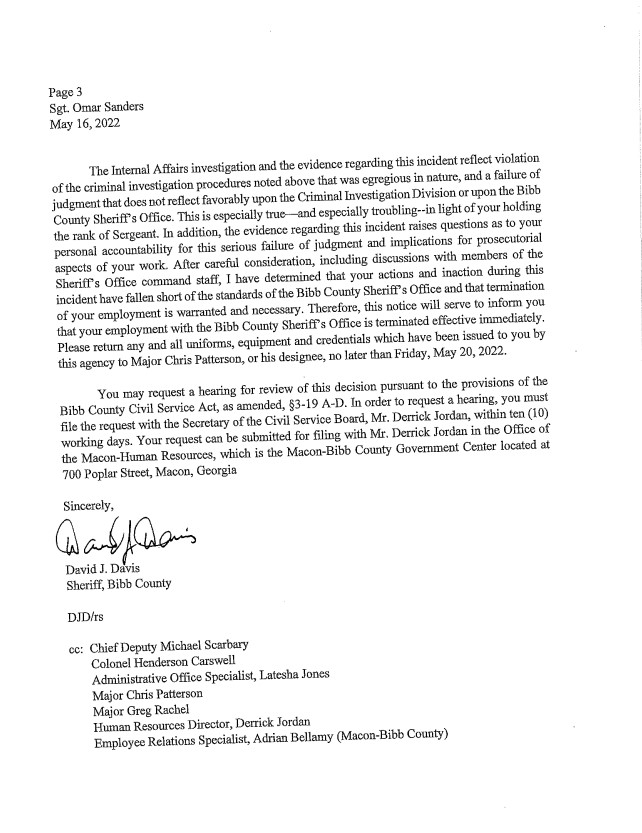 The Sheriff’s Office declined our request for an interview since the situation is going through the appeals process.