MACON, Georgia (41NBC/WMGT) – One group has launched a creative new campaign to encourage voter registration for the Nov. 3 general election. 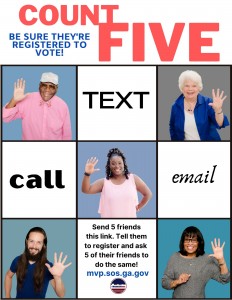 Campaign organizers ask that local voters to text, call, or email five friends and remind them to register to vote. In turn, the five friends will do the same.

“The idea of this is to create a web throughout our community by reaching five people, and those people reach five people, then we are going to reach others further into the community,” Cox said.