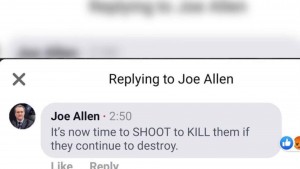 “I am very disappointed in my colleague,” Commissioner Elaine Lucas said.

41NBC News reached out to commissioners to get their opinion on the issue. However, Elaine Lucas and Virgil Watkins only discussed the expectations of an elected official but did not comment on the resignation.

“I would expect that elected officials should be sensitive enough to what’s going on in their community and among their constituents,” Lucas said.

Joe Allen issued several apologies, including another one Friday morning on Facebook.

“Nobody should make insensitive remarks about a situation like that,” Lucas said.

Commissioner Allen is not seeking re-election in the upcoming June 9th election.