Starting Friday, a strong high pressure system will set up over Iowa and Missouri. This system will bounce east and north through the weekend, but it will still maintain control of the weather across the southeast. 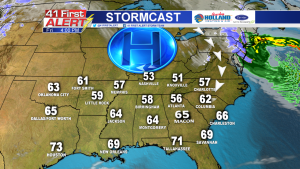 Cooler and drier air will be flowing from north to south. Temperatures will not be as high as Thursday when Macon broke a 100 year old record high temperature topping out at 85 degrees. Nope…no 80’s in the forecast for the first week of March. In fact, it’ll be much more seasonable in Middle Georgia with temperatures trending closer to average, mainly in the middle 60’s. 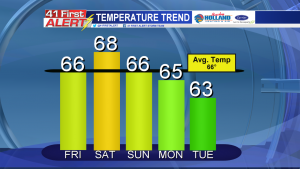 There’s nothing but sunshine in the forecast this weekend. Early next week, another cold front is expected to sweep through the southeast. Rain chances will likely be highest on Tuesday. This next front has the potential to drop high temperatures even lower, as low as the middle 50’s by next Thursday. 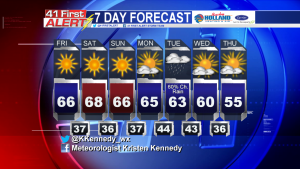