HOUSTON COUNTY, Georgia (41NBC/WMGT) – On Friday, Centerville police officers helped the Houston County Sheriff’s Office capture a man trying to get away in a vehicle because of multiple warrants. 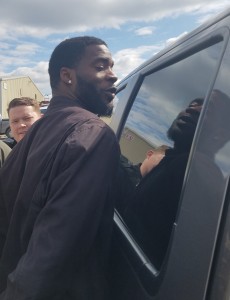 Broderick Clark hit another vehicle trying to flee and wrecked into a mailbox.

Clark then tried running, but was captured by Centerville Police at Warner Robins Supply.

On Wednesday, officers pulled over a vehicle for speeding in the school zone.

During the stop, officers searched the vehicle and found marijuana and items used to traffic marijuana. Officers also found a loaded handgun and a loaded AR15.

On Monday, officers were called to a convenient store, in reference to counterfeit money.

The investigation revealed the 14-year-old was involved in a recent burglary. The teenager had been caught on camera breaking into a home and stealing guns.

He was turned over to Houston County Sheriff’s Office Juvenile Division.

The 10 year old was turned over to a guardian.

Because they are both juveniles, no pictures or names are available.